At least here on planet Earth. Their music, their spirit, their legacy will surely live on forever, passed on to future generations to come.

I’m talking about the late David Bowie, Prince and now George Michael (who passed on Christmas Day), three iconic men from different walks of life who dared shake the cultural diaspora with their unabashedly outre lyrics, wild and statement-making outfits and inimitable swagger. More than anything else, these were men who were the ultimate of freak shows in their own rights. They forced masculinity — with all of its ugliness, fragility, insecurity — on the map, shaking it up, turning it upside down, dousing it with gasoline, and lighting it up for all the world to see, almost like a trophy won for all other misfits out there to see.

[They were] three iconic men from different walks of life who dared shake the cultural diaspora with their unabashedly outre lyrics, wild and statement-making outfits and inimitable swagger.

It was David Bowie himself who was a fearless trailblazer who flaunted his flamboyant swagger. His gaunt cheekbones, porcelain skin, flame-like hair that flickered like a fire onstage. It was undeniable that his persona, as other-worldly and unique, was altogether perplexing. More so, alluring. It didn’t matter if he personified a man, a woman, or neither in his work. Sexy, he proved, had no gender. Sex, after all, had no single, boxed in, suffocated definition. It was the 1970’s, a time when the British Parliament had only decriminalized homosexuality a few years earlier. “It’s true — I am a bisexual,” he told Playboy. “But I can’t deny that I’ve used that fact very well.”

His gaunt cheekbones, porcelain skin, flame-like hair that flickered like a fire onstage.

His genderless aura was years ahead from the artist known as Prince, an American man who shared the same spirit. It was Prince, too, who redefined masculinity, confronting how rigid and silly its rules were, how ridiculously fragile it was. Forget sexy, he was sex. Sex oozed from every move, every pore, whether it was his relaxed jheri curls, ass-less chaps, or the orgasmic-like falsettos in his every song. He wore heels onstage, showcased his tout torso at every chance he could get and brashly declared he was the new era of individuality.

Forget sexy, he was sex.

“I’m not a woman, I’m not a man, I am something that you’ll never understand,” he defiantly sang in 1984’s “I Would Die 4 U.” The single was the fourth mega single from the Holy Grail of all albums known as Purple Rain. He was, of course, lightyears ahead from everyone else. Gender fluidity today, echoes these exact sentiments.

And so was George Michael. He became an instant overnight star with his band Wham!’s hit single, “Wake Me Up Before You Go-Go,” a track that was a blatant wink and a nod to his own sexuality. The music video has him skipping gleefully in neon brights, his short shorts showing off his hairy, muscular legs. George’s own camp was closeted then, but he allowed a few into his secret club with a wink and nod, other gays out there realized they weren’t alone .

It was George who graduated on to become one of pop’s biggest bad boys with his 1987 hit, “I Want Your Sex.” The track was was deemed too risque that it was banned from some airwaves. The video –which could be taken out of what seems like any scene from “50 Shades of Grey”– has a chiseled George tying a silk blindfold onto a svelte blonde, seducing her into bed. When he finally came out in the 90’s, it was both liberating and eye-opening for fans worldwide, though his sexually dared not define him.

“I don’t think you can base your sexuality around anything other than the people you fall in love with,” he told The Advocate in 1999. “When I was younger I slept with men and women, and I didn’t fall in love at all.” Sexuality was also something that he knew wasn’t completely rigid. “I think that one of the things that is so difficult in the modern world [is] to actually accept is that sexuality is a really, really blurry thing,” he said in a 1996 interview.

It’s a concept that was extremely ahead of its time, one that David and Prince both echoed as well. Today, we know that sexual and gender fluidity is actually scientifically proven. We also know that masculinity as a definition is one that is impossible to define. What exactly makes a man, well, a man? Masculinity is as diverse as the many cultures, nationalities, ethnicities, sexualities that paint our world.

Masculinity is as diverse as the many cultures, nationalities, ethnicities, sexualities that paint our world.

Where do we stand in 2016? It’s obvious that masculinity is as fragile as ever, a construct that stands on a toxic foundation with shaky legs. It only took three of the biggest iconoclasts to have died this year for us to force ourselves to confront how fraught it is. They understood way back then what many today still continue to miss today: that eschewing social norms, adopting traditional womenswear and “feminine” physicality, being outspoken with fierce sexuality, flamboyant or not, doesn’t make one any less of a man. No, quite the opposite.Their power, their might, their brilliance could never be boxed in. Being audacious, awe-inspiringly original and absolutely authentic: What’s more masculine, what’s more powerful than that?


I’m a man who took my wife’s last name 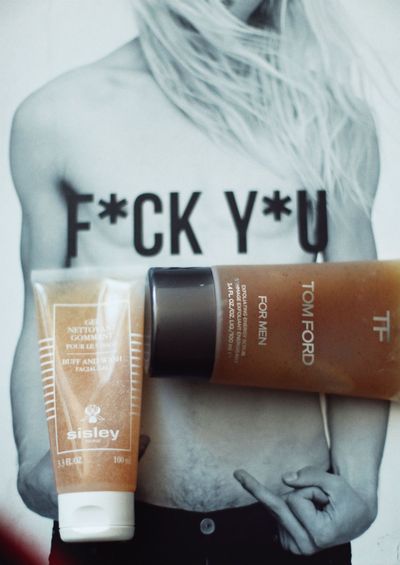