This year was by far the worst year in the history of my life.

Okay, that’s not completely true. There was 2002, the fourth year in a row I had braces and when my orthodontist casually told me I had another four to go (and I’d need headgear). The year 2009 was when I moved to NYC and found that all five (that’s five too many) roommates casually left beer bottles around the apartment. They lined them on the floors, in our sink (why?!), in our bathtub and on top of our toilet (seriously, someone explain this one to me). Then there was 2013, the year when I went through New York Fashion Week with an eyepatch because I had Bell’s Palsy. Literally, countless people came up to me asking if I was making a fashion statement. “Ew, is it contagious?” an editor colleague who shall not be named (you can text me later for the answer) told me.

Though those years totally sucked, nothing could be worse than 2016.

This no good, very bad year.

We don’t have to go on with the details of why 2016 was the worst year in recent history.

We elected an orange authoritarian as leader.

Needless to say, it’s difficult to live in your own skin when said skin is already D-E-A-D-A-F. Or at least, feels that way. In times like these, I turn to exfoliators to scrub away what seems like is wrong with the world. Scrubs, at least to me, are instantly satisfying, a means of getting rid of that extra bad Juju hanging on that Oprah’s Master Classes seem to have missed. They’re like face shamans, getting deep into your life, shaking the living bejeezus out of you and then leaving you renewed if not raw to then contemplate the next steps of your existence.

Don’t know what exfoliators are? They’re products you scrub on your face to slough dead skin cells to reveal a new, glowing complexion. Basically, it’s necessary for proper grooming maintenance and to help your face can regenerate new cells.

I like to use two exfoliators in these situations. They’re pricey, yes, but sometimes you need to be a bougie broad to get rid of your problems, words inspired by the life of Mariah Carey. The first is from Sisley, made from natural plant extracts along with a few essential oils like lavender. Its small grainy particles scrubs my face so gracefully, I’m left wondering if there’s any dead skin left on me. My almost 30-year old complexion fades away into the background and in comes a younger, more vibrant Ariana Grande of a self, ambushing the spotlight, one who only has one good angle, licks donuts when bored and never changes his hairstyle. In all seriousness though, Sisley is superb in getting a good scrub. $79. Buy here

It’s as good as Tom Ford For Men’s exfoliating energy scrub. It smells exactly what you’d think Tom Ford in nothing but his bathrobe standing in front of one of his trillion mirrors inside his Dallas mansion would smell of: musk, masculinity, sex, sweat, oh, and apricot seeds. At least, that’s because the main ingredient in the product is just that. The apricot seeds help slough away your dead skin cells like you will do to your toxic friends and family members in 2017. It polishes your skin, leaves it with a clean finish without stripping it completely dry. $48. Buy here.

Disclaimer: These two exfoliants might not completely reroute your life into a better 2017, but they will certainly get you to remind yourself that you can scrub away negativity and watch it swirl down your bathroom sink. Exfoliating is a process where you have to take out five minutes out of your life and reflect who you are in the mirror in front of you. It can be an empty experience, sure, but it can also be a spiritual, transformative one if you let it be. And if all else fails, you can always let out a big, bellowing, reverberating (and satisfying) F*** YOU, 2016. F***. YOU.


Why flying on airplanes is even more disgusting than you thought 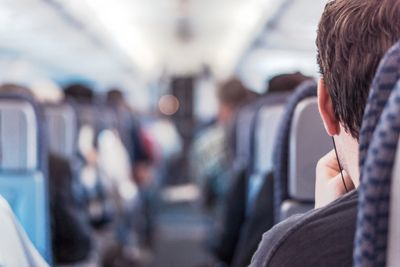