Meet Vic Jamieson, the TikTok guitarist who embraces the spectrum of beauty, sexuality, and gender

If you don’t know his name, you do now.

Vic Jamieson is a charming 28-year-old British Chinese guitarist based in London with two decades of playing under his belt. He has toured with major U.K. artists like Mahalia and Jvck James, and when his fingers grace a guitar, pure art comes out.

SEE ALSO: What it’s like to come out as non-binary

While he is known for mastering a variety of songs by ear (from Rihanna to Eddie Van Halen) and taking the TikTok world by storm, Vic is so much more dimensional than meets the eye. In fact, he recently came out as bisexual and has been very in tune with his sexuality and gender expression. Very Good Light sat down with Vic (via Zoom, of course) to discuss his biracial upbringing, TikTok fame, coming out, and more.

Tell me about you.

My job currently is a session guitarist, so I play guitar for artists that need a guitarist. I do some online teaching as well, and that’s particularly useful during this time with COVID. It’s pretty much been my life for the past 12 years, really. I think I’ve sort of let a lot of other aspects of me fall a little on the wayside a little bit because music takes four or five hours a day and I’ve been doing that for several years. I actually have to work quite hard at asserting to myself and other people that I’m more than a guitarist, so I’ve been blossoming in the past year.

Right now, I’m really on a journey of a very transitional stage and it was all triggered by me coming out as bisexual a year and a half ago. From that point, I just kind of deciding that I’m going to try and put me first. I’m going to try and be more selfish, in a good way. I’ve never really done stuff for me in the past and because of that, I’ve suppressed a lot of things.

I didn’t think that I was part of that conversation. I just thought I wanted to look more like a girl but because I didn’t want to transition as such that I wasn’t part of the whole conversation, but turns out, I am.

Before we dive into your story, I have to know. Who’s your biggest influence in the industry?

Fleetwood Mac, Guns N’ Roses, and Ben Howard are chilling at the top spot right now. I really love Norah Jones as well. Quite a few of them are just what got me into music, but it changes a lot. I actually try not to go too hard for anybody and just do my own thing.

You’re biracial – half Chinese and half English. What was your upbringing like?

My mom moved here when I was 3-years-old, so she’s fairly English. She speaks Chinese to the generation above and English to her siblings and her generation, so I’m second gen. I’m quite disconnected from my Chinese side actually and it is something that I have a lot of focus on because I know that there’s quite a big gap there.

I grew up on the south coast of England. I had an amazing upbringing. It was really cool. But there wasn’t much diversity, like being in a [class] of 200, and there only being five people of color. You are other, and you’re different.

It was only when I moved to London, where it’s insanely diverse, that I realized how much worse I was treated down south. It was way more open in London. My life is definitely better in somewhere it’s diverse. And I’m working on being more in tune with my Asian side.

I began to realize I was bi when I was about 17-years-old. Before that, I was just pursuing girls. But secretly to myself, I was like, ‘I’m gay. I’m blatantly gay.’ And I thought naively as a child that when I was finally with a boy, I would become gay. And that would be way better than being with girls. But I also intended for that to never happen, as I told myself I was going to take this to my grave, which is a sad thing.

Then I was with a boy, just by a wonderful, wonderful chance. After that, I was like, ‘Oh, I still like girls.’ Back then, I definitely thought of gender as a binary put it that way. I think quite a few of us did ten years ago.

Over the years, I didn’t really tell many people. I told some of my closest, girlfriends. So maybe like, in 10 years, I told 20 people. I saw it as a dark secret. I accepted it was there, but wished it wasn’t, which is fucking unhealthy. I just kind of saw it as this deep dark thing, and just lived my life as a straight person.

In May 2019, I was speaking to a band member. He was talking about how he felt uncomfortable that he had to do a gig in a gay club. I challenged him on it and he was like, ‘Yeah, but like, you’re straight though, right? So like, you get it.’ And I was just like, ‘Oh, yeah, yeah, bro.’

I felt like shit. I was like, ‘Why am I lying about the biggest fucking thing? About who I am.’ I really hate lying, I don’t lie about stuff. I really do my absolute best to live a very honest, wholesome lifestyle. It just made me feel sick to my stomach that I wouldn’t lie about something really small, but I would lie about something massive. And that was the final straw.

I came out, and it was amazing. My whole life’s different. Recently, I posted my first picture of like, trying to look sort of female with makeup. And that was kind of another big secret I’ve been carrying around.

Since I’ve come out, people have noticed a big change in me. I’m just like, freer. I don’t try as hard. I’m not trying to be everyone’s friend, and I’m just more open. I’m not trying to impress or deceive anyone. I have nothing to hide, so I don’t need to try as hard to like, build up this wall.  It’s been absolutely amazing.

How did your family react when you came out?

How has your dating life been since?

Dating has been interesting. This is actually the first I would say I’ve dated as bisexual. I’ve found that since I’ve been more open about who I am—visually and sexually and stuff—I seem to be attracting a set of people that have more in common with me than I did before. Which is really, really nice.

On the dates that I have been on, I’ve had a lot more in common with them than I think I would have if I wasn’t so open about who I am. So that’s pretty cool. I believe what you put out, you get back.

How has honing into this duality of your sexuality shifted your life?

I noticed that nowadays if I’m in a safe space—for example, where I get my hair done at Bleach London where everybody’s queer, and everybody’s super colorful—my mannerisms are different. The way I speak is different, and the way I act is a bit different. It is a little bit more feminine and I love it. It’s interesting that that environment allows me to do that, and then I can act in the way that I feel is most natural.

What’s been one of your favorite memories since coming out?

After I came out, some of my best lads and I went out for my birthday. That night we openly talked about my sexuality, my experience, being with boys and the difference being with girls and stuff. My friends were all so fascinated, it was so normal to talk about and actually so interesting for everybody. And that was really nice for me. That was awesome.

They’re not really in those circles. So for them to just greet it with nothing but love, interest, and excitement, it’s awesome. Absolutely awesome.

Before I let you go, is there anything else you’d like to tell our readers?

I think it’s a really exciting time for pushing gender norms. It’s attractive to people, and I don’t necessarily mean sexually. If you can see somebody who is authentically themselves and so self-confident, that’s so attractive, right? That radiates far more than whether you look good or not because that’s very subjective.

It’s more important than the physical aspect. And yeah, maybe that means you wear makeup and heels or maybe it doesn’t, but if you can, just project your true self, your true nature. My friend wrote “What is your true nature?” in Chinese and now it’s my phone background. So I think just working on expressing your true nature is the best thing for everybody. That’s goodness. 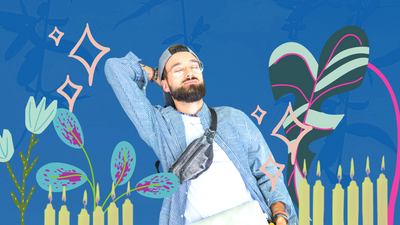 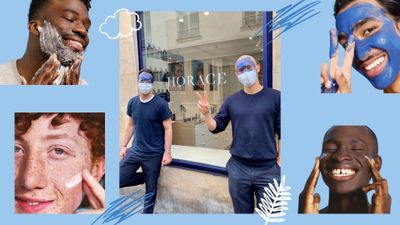