Speaking with this up-and-coming Gen Z pop artist about how she navigates and honors her identity and culture through music.

Through the wonders of the TikTok algorithm, I discovered Chuefeng, a Gen Z pop/indie pop singer-songwriter of HMoob (an indigenous community found in Southwest China, Vietnam, Laos, Thailand, and Myanmar) descent. Through her music, she represents the diaspora of first-generation Asian Americans with traditional HMoob instruments while incorporating Western cultural and musical norms.

[Editor’s note: Here’s a great article explaining the etymology of the word “HMoob.”]

When Chuefeng was eight years old, she found music to be a coping mechanism in the process of experiencing her complex emotions through her parents’ divorce, while simultaneously living in an Asian household with complicated dynamics created between the separation of her parents’ immigrant experience and Chuefeng’s first- generation mindset. Comments in her native language, such as “you’re too loud,” were a constant in her early life, given that her household didn’t like loud music. However, that drove her to pursue music even more as a pathway to understand herself and the environment surrounding her; it was her solace in the chaos. It allowed her to learn more about herself.

“There is more to life than just the life I have been exposed to.”

Her trans identity was one of them, “I didn't have the language, courage, and resources to name it until I was 21.” Music helped her oscillate between her femininity and masculinity, seeing it as a spectrum rather than a set binary. Growing up, she found herself represented in Jake Zyrus, a Pinoy trans singer. Although Chuefeng was not Filipino, she could relate to someone who also sang his heart out while transitioning, noting it was life-changing. This was a moment where she became aware everything was possible at once, from being trans, Asian, to being a singer, and expressing herself through music when words weren’t there.

Her bilingualism makes it a fun and challenging experience to create music. In it, she strives to write and incorporate traditional sounds to honor her people and culture, while understanding the special bond her native dialect has with her emotions, sometimes forcing her to take a step back due to how overbearing they can be. “Me Nyuam HMoob,” her most recent single, is an example, as the pause button became too familiar while tears flowed down her face.

Her HMoob identity is preserved in her music alongside her queerness and transgender experience, allowing herself to exist as a whole. “The two come together beautifully and is then preserved not just in the music that I share with the world, but also the lives I touch.” The lack of education on transgender issues and attitude towards it from the HMoob community makes it feel like an unsafe space where Chuefeng has to divide herself into pieces to fit in a mold of what is “acceptable,” a process she hates.

Being a queer Asian in Midwest America has been lonely and isolating. “No shade”, Chuefeng adds. The right allies, chosen family, and community members make it all bearable. She stresses the importance of that net of support which can be hard to find as an adult. However, putting yourself out there (safely, of course) is a clear start. After all, we are humans who need interactions. That’s what makes our lives so special. Sometimes this can be duetting another person's TikTok, or messaging someone and telling them you appreciate their content and music. “I actually have a friend who is on the same career path as me. She’s so wholesome, and we crossed paths thanks to social media!”

Since music has become her career, It's both her stressor and unwinding. “Multiplicity and duality are a thing — any and all things can exist at once, and a lot of things do exist at once.” Depending on her approach, it can be a tool to unwind when she just wants to enjoy it and have fun.  If she’s working on harmonies or songwriting, it is guaranteed to be stressful. This has taught her to adopt some relaxing practices to protect herself against anything life throws at her.

She makes it imperative to block out two hours every morning. This can have a monumental impact on her energy and how she approaches her day. “Setting an intention helps me in navigating music, life, boundaries, and my mental health.”

Not touching my phone first thing in the morning — a tip learned from Youtuber Jackie Aina. It’s so easy to get drowned in emails and aimless scrolling, so establishing this discipline has been good for her mental health.

Although she has a complicated relationship with food, nourishing herself is crucial to her needs. She says that if she doesn’t eat according to those needs, her mental health spirals quickly. (My former ballet instructor used to remind us to listen to our bodies first, because it will tell us what it needs.)

Navigating mental health is both an easy and challenging task for Chuefeng. “On one hand, I'm HMoob, and that means I'm Asian, and as many other Asian kids, I struggle with the same difficult conversations when it comes to validating mental health issues, experiences, and boundaries.” It's a draining work in progress to approach conversations regarding mental health being AAPI and transgender due to the taboos around it in the community. “Understanding where our parents are coming from — not only geographically but ideologically–– compared to us as Asian Americans, taking into consideration other important factors, such as the difference in age and personal views, makes it an issue that is not one-size-fits-all.”

On the other hand, being HMoob and being raised in a culture and religion rooted in relational ways of understanding and respecting the world allows her to approach her mental health from a holistic and spiritual standpoint. “Mentally, I can be depressed and anxious, and spiritually, I raise questions such as "What does that mean for my ntsuj plig (soul and spirits)? How are they? Are they lost? Are they lonely?"

To this, she reminds herself. "You are love incarnate. You are worthy of love at all times, and there are so many people you have yet to meet who you will love so deeply, and they will reciprocate accordingly."

A few things that make Chuefeng feel beautiful are her hair, her love, and her passion for learning. Hair has been important in Chuefeng’s transition and approach to beauty. For a long time, her hair was a trigger point for gender dysphoria, but now she has overcome it and embraced it. In the future, she wants to challenge herself to shave it all off. She’s not ashamed to wear her heart on her sleeve. Since middle school, she’s been willing to try and learn new things, an attitude. “There is more to life than just the life I have been exposed to.” She credits her growth as a person to it, which makes her eager to learn and experience life.

What makes her most proud of being queer, gen Z, and Asian is simple but impactful. “I think it would have to be the fact I get the honor of being part of a generation that is so inviting of change.” Although she recognizes that there can be some bad in this world, she also notices how Gen Z actively tries to change that to the best of their ability. “I hope I can do my part and make everyone proud.”


All eyes on Will Gao 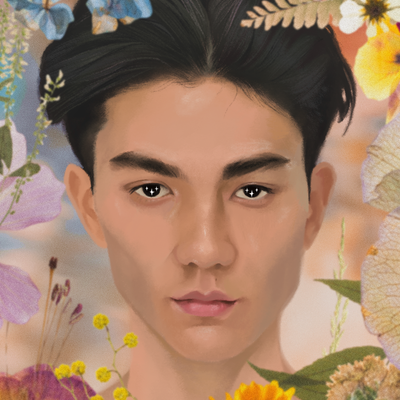