When Matt Shepheard was younger he could remember sneaking a piece cake out of his parent’s kitchen.

The cake was off limits but it didn’t stop him. His mom came up the stairs looking for him. Panicked, he stashed it behind the toilet. It was then that he realized he had an eating disorder. Years later, he’d learn of the exact terminology: Binge eating disorder (BED).

“I would binge eat, hide food under my bed,” he recalls, bringing back memories from as early as the second or third grade.

SEE ALSO: The one thing everyone misses when they talk about masculinity

Binge eating disorder is severe and involves recurrent episodes of consuming large quantities of food. It’s not typically what people think of when the term “eating disorder” is mentioned, but it is among the most common. Only recently, was it formally recognized in The Diagnostic and Statistical Manual of Mental Disorders, the official benchmark for psychologists.

Matt describes his binge eating in terms of shame, hiding, social stigma and extreme impulsivity. At his heaviest, he was over 300 lbs. and describes himself as morbidly obese.

There used to be a long-standing cultural idea that eating disorders and body image issues only affected women. But Matt is part of a growing cohort of men speaking candidly and publicly about how these issues affect them, too. A 2014 Study in the Journal of the American Medical Association (JAMA), found that nearly 18-percent of adolescent boys are highly concerned with their weight and physique. But men, as Matt confirmed, don’t want to talk about it.

Matt is now in his 11th year of recovery and lives in Los Angeles. He remains involved in a “recovery community,” is active with the National Eating Disorder Association (NEDA) and uploads videos on a personal YouTube channel where he “talks about the stuff men don’t want to talk about.”

Matt grew up in an alcoholic home and says he used his own addictive, obsessive eating as a way to “cope with the chaos.”

There used to be a long-standing cultural idea that eating disorders and body image issues only affected women.

“I was stuffing my feelings to help me deal with whatever it was that was going around me,” he says.

Dr. Jamie Farquhar, a psychologist who specializes in the treatment of eating disorders, says that men often seek out private, one-on-one sessions as opposed to group meetings. “This is likely due to the shame or embarrassment many men experience regarding their body image concerns.”

To admit to body insecurities isn’t often considered traditionally masculine so many men are reticent to talk about it.

“A common misconception is that body image concerns are the concerns of women or gay and bisexual men,” Dr. Farquhar continues. “Although rates are higher in these groups, all men can experience body images concerns.”

In 2007, Dr. Farquhar co-authored a study on the effects media messages have on the body conceptualizations of adolescent boys. The study, among other subjects, found that exposure to images of muscularized, “idealized” men had a negative impact on the way boys viewed their own bodies.

“A component of that study found that since the 1970s, men have been increasingly portrayed in the media with an emphasis on their physical appearance rather than how their body performs,” Dr. Farquhar explains. Men’s bodies are being objectified in the media perhaps more than ever. Imagine, for a moment, the major male Hollywood celebrities at the moment: Chris Pratt, Chris Evans, Chris Hemsworth. They share more than a first name, they have crazy ripped bodies, forms that take more time and money to attain than most men have. It’s no wonder young men are increasingly concerned about their physiques and in some cases go to extreme lengths to change them.

Those images are unrealistic and unattainable for most men, Dr. Farquhar emphasizes, and showing them so much in media is bound to have an effect on the majority of everyday guys.

The culture of perfection on social media isn’t helping nor is the fact that men hardly talk about it. “Masculinity, and what is means to be ‘a man,’ for anyone who identifies as a man, is a multidimensional construct that is ever-evolving,” he says. “It is therefore important to not reduce masculinity down to the presence of certain body features or types.”

Women too, of course, are presented with an unrealistic version of themselves in the media. But the consequences end up being very different.

“Women, in general, tend to evaluate their bodies based on one dimension – body fat – whereas men tend to evaluate their bodies on two dimensions: body fat and level of musculature,” Dr. Farquhar says. “As a consequence, women with body image concerns tend to engage in behaviors that are easily flagged as eating disorder behaviors such as dieting, vomiting, laxative abuse, excessive cardio exercise. Men, on the other hand, may engage in these behaviors but they also tend to engage in weight training and bodybuilding exercises that are not typically flagged as problematic, although they certainly can be for some individuals.”

18-percent of adolescent boys are highly concerned with their weight and physique … but men don’t want to talk about it.

Individuals like Matt who, in high school, recalls going through periods of exercise bulimia, an excessive and damaging compulsion to exercise after eating. It was tied up with a social pressure to look a certain way, to be muscular, fit, and to act a certain way – tough and traditionally masculine.

Being obsessed with his own body image was a way for him to avoid confronting real emotional traumas. He says the same can be said of a lot of men who divert their toxic masculinity, their limited perceptions of what men should be, into other unhealthy avenues.

“Men are taught that you can be insecure but you’re not supposed to express those feelings of insecurity,” says Louis Baragona, the style and grooming editor at Men’s Health and Very Good Light contributor. “It can be joking or self-deprecating, but it can never be honest: ‘I feel really shitty about how I look.’ ”

Louis has lived in Brooklyn for two years, but hails from Akron, Ohio, and it’s back in the Midwest where he developed bulimia as a 12-year-old. “There were things I couldn’t control so I sought control through an eating disorder,” he says. “I had been throwing up on and off since I was young. I was always super insecure about my weight.”

From an early age, Louis was also aware of the messages being filtered through the media about how men should look, particularly gay men.

“Men who are thin are told they’re too skinny and men who are fat are told they’re disgusting. I knew I was different from what people picture in their minds when they picture gay people. Even when I was in high school, people would say, “You don’t look gay’ and I understood they meant ‘You’re not a physically fit, ripped, stereotypical guy.”

Shows like Queer as Folk and Queer Eye, innovative for their time, nonetheless helped contribute to this one-dimensional view of what gay men looked like. And, that view didn’t include many people of color or bigger men. The were all well-dressed, well-groomed and traditionally fit.

The problem worsened when Louis began dating. He didn’t fully realize the ways in which body image permeates the gay community until he joined dating apps. Men would match with him just to call him fat or ugly and say things like, “I can’t believe you actually thought I would match with you.”

“Men will constantly body shame you on those apps,” Louis says. Dr. Farquhar confirms that gay and bisexual men are particularly vulnerable to unhealthy body image.

“Men are definitely a little bit silent when it comes to the tangible emotional consequences of their insecurity,” the doctor adds.

For both Matt and Louis, it’s empowering to listen to other men speak candidly about their experiences. But they both admit there is a long way to go before reaching true body positivity.

“I think the narrative is shifting, and in the time it’s gonna get even better,” Louis predicts.

At 38, Peter Inch has seen the longview of that ever-evolving landscape of male body image and believes that social media actually makes body positivity and pressures worse. His three children – two adults and a 6-year-old – are one of the main reasons he’s so open about his own body insecurity.

“I don’t want them to face the same kind of issues that I faced,” he says of his youth as a skinny kid who dreamed of being “bigger.” “Being comfortable with myself took a great deal of time, to be honest.”

His experience isn’t singular. “There are some males who do want to be thinner and are focused on thinness,” Dr. Alison Field says. “But many more are focused on wanting bigger, or at least more toned and defined muscles. That’s a very different physique.”

Dr. Field is an associate professor of pediatrics at Boston Children’s Hospital and the lead author of the JAMA study.

Peter is skeptical that things are improving. “There are so many filters and so much airbrushing,” he says. “With the rise of social media and cell phones, the pressures are greater.”

Peter has starred in several photography campaigns aimed at alleviating some of those pressures. One for Revolt Union featured a set of mixed gendered models of all body types, with Peter posing shirtless. He’s covered, nearly head to toe in tattoos which he says “are like a shield for me, like armor.” He said he wanted to challenge the beauty standards of the New York runways.

The male body positivity movement is small but growing as more and more men speak out about their insecurities and its consequences.

Men should know it’s OK to admit sometimes feeling bad about your bodies. Men are taught it is unmanly to do so, but that is a classic form of toxic masculinity that limits the kinds of emotions men are allowed to express.

The message should instead be that vulnerability is powerful, even beautiful. In fact, more men are speaking out about body image, including Flash star Grant Gustin who recently shut down body shamers after his superhero costume surfaced online. And, more companies are putting diverse bodies in their ads, including retailer ASOS, which recently included plus-size male models online and in its collections.

So, the narrative is changing but, it takes more men being open to push the movement even further. It’s time men start speaking up more about body image. Beauty is skin deep and it’s time we talk openly about our bodies and how beautiful they really are.

If you think you may have an eating disorder or are vulnerable to developing one, the National Eating Disorder Association has online resources that can help. You can also reach out to a local psychologist or trusted friend. 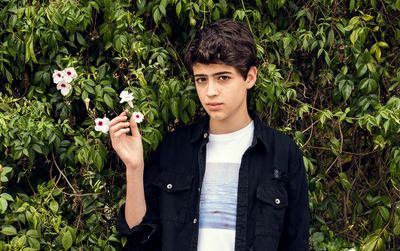