How Korean beauty helped me reconnect with my mother

Skin is pretty predictable and when there’s a problem area, fairly easy to treat.

When your skin feels dry you use a moisturizer, when it’s dull you might reach for a serum. But what do you do when you don’t feel comfortable in your own skin?

Within the last year I have been slowly immersing myself in the world of Korean skincare by educating myself on the products and philosophy. I adopted Korean skincare not only because I liked being a potion wielding expert, but because with every lotion and essence, every slab and dab on my face, I’m nourishing the skin that I was once ashamed of. More so, it’s one way to feel more connected to my Korean roots, a part of me I’ve only recently embraced.

More so, it’s one way to feel more connected to my Korean roots, a part of me I’ve only recently embraced.

I struggled with my identity as half-Korean and half-Puerto Rican in a predominantly white environment. I felt like the odd one out, having grown up in mainly southern suburban neighborhoods. To make matters worse, I was teased for using Korean words at school.  When my parents spoke to the teachers they would say it was no fault but my own; I was being picked on simply because I’d occasionally choose to speak another language.

Thankfully, my Korean mother was a sharp contrast to the environment around me. She was a source of complete confidence. Whenever I was made fun of for being different, she would comfort me and explain that being different was a wonderful thing that made each person special.

But at the age of 5, my parents split and with it came the detachment from my mother and her encouragement. In a matter of what seemed like a day, she was replaced by my stepmother. That’s when my struggle began.

I struggled with my identity as half-Korean and half-Puerto Rican in a predominantly white environment. I felt like the odd one out, having grown up in mainly southern suburban neighborhoods.

My stepmother once said something that stuck with me for a long time: “You’re pretty, but men aren’t supposed to be pretty,” she said. “Men are supposed to be handsome. Your face just isn’t normal. You need to man up, Eugene.”

“You’re pretty, but men aren’t supposed to be pretty.”

I was never concerned with masculinity before, it was kind of a lost concept to me that seemed pointless. I grew up not realizing that Americans placed such value in their hypermasculinity and that men were supposed to be rugged, tough, muscular, and macho. I was flung into this Western idea of what a man should be and I certainly did not fit into it.

With my mom now removed from my life, I lost my source of Korean representation and an Eastern take on masculinity, one now in retrospect I’ve always connected more with. My high school had 5 other Asian American kids, and Asian actors or models weren’t really heard of. I was constantly bombarded with white skin, blonde hair and blue eyes. That’s what the standard of beauty was. That’s what everyone aspired to be, it seemed. I slowly started to shun my racial background, instead, trying my best to fit in. I wanted to be noticed and desired, so I started wearing colored contacts, lightening my hair and did everything I could to prevent from tanning. If someone tried to associate me with either my Korean or Puerto Rican heritage I would reply, “I’m basically white!”

I was constantly bombarded with white skin, blonde hair and blue eyes. That’s what the standard of beauty was.

But I wasn’t white. I never have been and never will be. It took me a long time to realize that no matter what I did or how I presented myself, I will always be the slightly effeminate Asian-Latino boy in other people’s eyes. As time passed, I realized my jet black hair, almond eye shape and soft facial features weren’t flaws. Far from it. They slowly became my favorite parts about me because they were different.

I remember when I was younger, all of the “Asian” aspects of me were met with mockery or disgust. Spoke Korean? “Oh that sounds like ching chong ching!” Eat kimbap or kimchi? “That looks weird, why does it smell?” Correct someone on being Korean, not Chinese? “Oh they’re all the same. It doesn’t matter.”

Learning to love your skin goes deeper than any serum. Korean skincare is not only good for my complexion, but it’s deeper than that. It also nurtures my metaphorical skin. The interest sparked in Korean culture became a form of representation for me that I didn’t have before.

Learning to love your skin goes deeper than any serum.

My adventure with skincare has been one of self-discovery. I’ve spent more time and effort researching products and ingredients than I have for most of my college projects. Many nights, I throw on a face mask while I surf blogs, YouTube channels and online retailers to learn about products and different takes on how to care for skin. It’s become a hobby that I’ve enjoyed getting sucked into. Each lotion I layer on, each mask I lounge in, is in appreciation of the skin I have. It’s also a memory of what my mother told me all along: I was unique and that made me beautiful.

Everyone is different and everyone’s skin has different needs, but the best thing you could do for your skin is to love it. And SPF. Always use SPF.

Eugene Salas is a native to the suburbs of Georgia with a penchant for writing and skincare. A Korean mother and Puerto Rican fathered offered Eugene a wide world view that drove an inquisitive mind to write about the perception of race, both externally and internally, while living in the bible belt.Cat Baldwin has been a Brooklyn-based illustrator for 8-years, after fleeing the scent of patchouli that haunted her formative years in the Pacific Northwest. She spends her free time seeking out delicious foods and maintaining what she likes to call her “moon tan.” Follow her on Instagram @catbee643 for photos of cats, pizza and colorful city living. 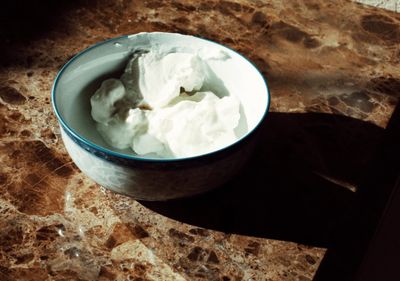 
I swear by this secret yogurt mask.


I got crabs and this is what I did