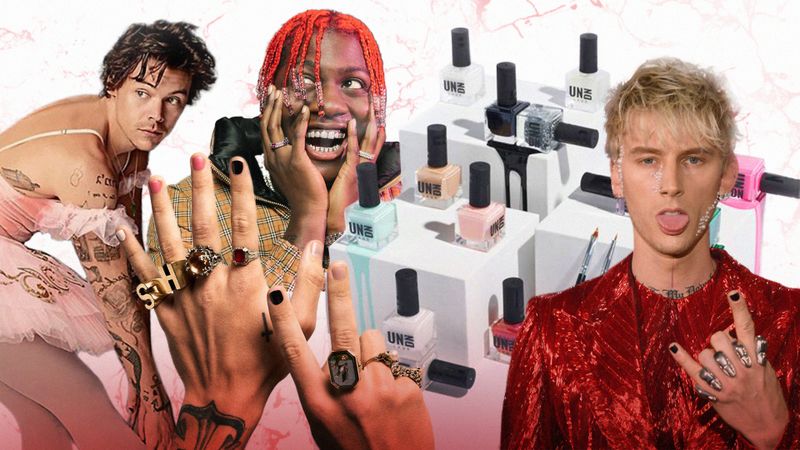 I believe that beauty should be a democracy – open and accessible for all.

So why is my gut reaction to all these new beauty brands from male celebrities so… displeased? Is it simply celebrity beauty brand fatigue? Or could it be my own internalized misandry (the asymmetrical counterpart of misogyny)?

In the past month, we’ve seen the launch of Harry Styles’ beauty brand, Pleasing, and Machine Gun Kelly’s UN/DN LAQR, a brand of nail color. Both men have demonstrated on red carpets and in appearances that they aren’t afraid to push back on gender norms: Harry caused quite a stir when he wore a dress on the cover of Vogue last year, and Machine Gun Kelly recently donned six-inch acrylic nails at the iHeart Music Awards this year.

And they aren’t the only ones getting into the beauty business. Backstreet Boy AJ McLean launched a nail polish brand called Ava Dean Beauty in December 2020. Rapper Lil Yachty was ahead of the curve, releasing a nail polish brand called Crete last fall (but balancing being a musician and beauty mogul was apparently too much for the singer, as he recently announced he was leaving the brand).

This expansion of what is considered “acceptable” displays of beauty for men is a sign of progress, surely. But while I’ve always advocated for diversity in beauty, I’ll be honest when I say that more largely white and heterosexual men profiting off of an industry that has historically been most oppressive on women—particularly women of color—is not exactly what I had in mind.

Is this merely a stop along the way to attaining freedom of gender expression, or are male celebrities just trying to cash in on the men’s makeup boom?

The male celebrities we’re seeing dismantle gender stereotypes through nail art are following in the footsteps of gender-bending legends like Prince, David Bowie, Dennis Rodman, and so many others throughout history – beginning all the way back in 3200 BC.

In “Pretty Boys: Legendary Icons Who Redefined Beauty (and How to Glow Up, Too),” author David Yi lays out a detailed history of how humans—and men in particular—have always been fascinated with adorning their nails.

Ancient Babylonian military men used to spend their final hours before battle getting a manicure, because “no man of importance would permit himself to be seen in public unless he had been beautified.”

Chinese emperors in 3000 BC were the first to wear fake nails, which we all know make any kind of manual labor nearly impossible, as a way to signify their royal status.

As David explains, the gendering of nails didn’t fully shift until 1911 during the Victorian era, when the “cult of domesticity” encouraged women to keep a clean household and maintain their appearance. Women who didn’t care for their hands were considered “low class.” The Victorian era also enforced strict gender binaries, so it was at this point that men stopped indulging in nail art and maintenance.

Today, it seems like we’re somewhere in the middle. We’re seeing more men start to express themselves through nail art, like Kid Cudi and Bad Bunny. And although we’re well past the Victorian era, the gender binary remains well-anchored within our society. The inequalities still present between men and women illuminate the hidden power structures at play when male celebrities launch beauty brands.

Gender inequality in the beauty industry

History tells us that men were the originators of the nail art trend, so it’s only fair that they get to hop back on the trend in 2021. However, we can’t talk about male celebrity beauty brands without talking about the gender inequality at work in American culture under capitalism.

The ease and speed at which men wearing nail polish has become normalized is another example of gender inequality. Men have the unique privilege to defend their right to paint their nails while the male gaze continues to perpetuate and enforce Western and Eurocentric beauty standards. In beauty, men get to have their cake and eat it too.

In Business of Fashion, Machine Gun Kelly (AKA Colson Baker) explains that he launched his line of polish “because individualism is dying and self-expression is how we keep that alive.”

“The brand’s name, UN/DN laqr, a play on the word undone, is an attempt to undo the stereotype that most beauty brands are created by and appeal to women,” writes author Rachel Strugatz.

While the beauty industry certainly caters to women, statistics show that most beauty brands are not women-owned or founded, and in fact, men are the ones at the top calling the shots.

When WWD named 100 of the biggest beauty companies in 2018, Glamour found that only 10 had a female CEO.

“In larger public companies, the position of CEO is governed not only by the company but by the shareholders, and their interest is always in the finance side, so a lot of CEOs—who are men—are brought in because of their financial successes,” Virginia Bonofiglio, associate chairperson of FIT’s cosmetics and fragrance marketing department, tells Glamour.

According to the Fortune 500 and S&P 500 companies of 2020, only 37 are led by women. Of these 37, only one helms the ship of a beauty company – Mary Dillon of Ulta Beauty, Inc. Out of the top ten largest global beauty brands, the only female CEO is Coty’s Sue Nabi.

The beauty industry is dominated by men in C-suite executive-level positions, deciding on foundation shade ranges, approving female-centered ad campaigns, and further perpetuating the gender binary in the aisles of your local drugstore.

In the article for Business of Fashion, journalist Rachel Strugatz tells the reader that Colson cancels their Zoom interview and instead sends over responses via email. As the leading digital authority on the global fashion and beauty industry, BoF is no small fry, and getting the publication to cover your entry into a new sector is key to garnering public support and legitimacy for a fledgling beauty brand. Colson’s flippant dismissal of the interview can be partly explained and excused by his rockstar persona, but it goes deeper than that.

Men in beauty, like Colson (and before him, Jeffree Star), are sitting at the top of an uneven power structure in which their peers in the C-suite are predominantly male and their customer base is predominantly female. This power imbalance essentially gives men a hall pass to behave badly without consequence, especially if you’re entering this space already wielding a certain level of power and influence.

Women in similar positions are held to higher standards. Take Valkyrae, a gaming influencer who got canceled for launching her blue-light-blocking skincare brand, RFLCT. The gaming and skincare community jumped on Valkyrae, citing thin evidence surrounding the claim that blue light is damaging to your skin. RFLCT was taken off the shelves at Ulta within a matter of days, and the brand shuttered shortly after – all while plenty of other blue-light blocking skincare products are still available to purchase from every major beauty retailer.

Colson’s bad-boy behavior is reflective of the standard we’re willing to accept from men in beauty—men who do what they want and speak their minds—but not from women.
In a democracy, we, the people, hold the power. It’s up to all of us to protect that right, and sometimes that means questioning the systems that are meant to uphold and enforce that power. I believe that everyone should have the freedom to participate in beauty rituals that make them feel their best.

But when I consider the deep patriarchal roots of capitalism and the fact that even in the female-centric beauty industry, men still hold more power than women, I question if male celebrity beauty brands are really the key to shattering gender binaries – or if they’re just enforcing centuries-old social systems designed to keep men at the top. 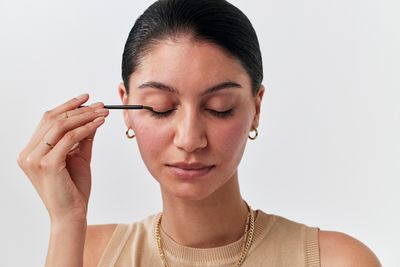 
Enhance Your Eyelashes With Latisse