Have you ever seen Inside Out?

A new year means new changes — or so Instagram says — so I entered into 2022 expecting the best. New experiences, new people, an entirely new city. From where I stood, the new year was sparkly and shiny. No more ‘looking on the bright side,’ I’d live on the bright side. Take that, 2021.

Come January 1, there’s change floating in the air, potent as your neighbor burning incense down the hall. It’s everywhere, impossible to ignore. We buy new calendars, write out lists of resolutions, and oh so suddenly our lives are expected to take a turn for the better.

But, now that we're a quarter of the way into 2022, I’m unsettled by my lack of transformation. I should have found total inner peace by now. My skin should be clearer, my hair should be smoother, my sleep schedule should be more consistent. I should be able to spell restaraunt. Restraunt? Restaurant.

Apparently, it’s not that simple.

The reality is humans aren’t designed for automatic transformation. We’re pretty slow to change. According to Dr. Caroline Leaf, people take 63 days to change a mental habit. And, most people don’t last even four days.

“It’s not a magic pill that you can just swallow,” says Annie Lin, founder of New York Life Coaching, on New Year’s resolutions. “For anything worthwhile in life, it takes effort, it takes showing up and it takes courage to embrace whatever comes your way."

Change is a natural part of life. It’s happening all around us, all of the time. We have no control over that, Annie tells Very Good Light.

So, why do I still feel like I’m falling short?

Medical News Today defines toxic positivity as, “an obsession with positive thinking. It is the belief that people should put a positive spin on all experiences, even those that are profoundly tragic.”

Every new year, toxic positivity takes over. It fills my Instagram feed with declarations of “new year, new me” and crowds my TikTok with perfect morning routines. People claim that this year they’re not accepting negativity — only good vibes. It’s talk of happiness and joy, all rose-colored glasses and silver linings. If you’re anything like me, seeing that much positivity makes me feel like I’m not doing enough in comparison.

In the transition to the new year, people tend to lean into toxic positivity, because they’re hoping for a new start. People will slap a definitive label of “good vibes only” onto the new year, but that sets people up for failure.

“Things do go wrong,” she adds. “That’s just the nature of life.”

Happiness is a great thing, obviously, but it's also not all there is. Toxic positivity is built from an assumption that all feelings can be either good or bad, Stephanie says.

“Feelings are just what they are,” she says. “Feelings show up unapologetically and they all serve a purpose.”

“It’s kind of like the movie Inside Out,” Stephanie tells me.

In the animated Pixar film, five colorful personified emotions guide 11-year-old Riley through her life. When Riley’s parents decide to move, Joy, her personified happiness, thinks the solution is to limit Sadness’s influence on Riley. The film ends with Riley understanding that Sadness is a necessary emotion that can actually enrich happiness.

Sadness isn’t always a comfortable emotion, but no one emotion is more important than another. Emotions exist because they’re trying to communicate what you’re experiencing, so when we paint everything as positive, we lose out on fully feeling life.

“You need that pain, you need that emotion to go through whatever you’re going through,” says Greg Gilmore, certified life coach and president of Clear Life Services. If you don’t let yourself feel the bad stuff when it comes up, chances are they’ll come out at the wrong times.

The flip side: ‘Cautiously Optimistic’

If toxic positivity is falsified optimism in dangerous excess, cautious optimism is pessimism in disguise. Recently, especially since the pandemic, people throw around the phrase, “cautiously optimistic.” Hoping for the best, expecting the worst. But, the caution negates the optimism. Going in with “no expectations” to avoid disappointment isn’t any better than going in expecting the worse.

It’s okay to be truly optimistic. You don’t have to choose between believing that everything will be great or not having any expectations at all. Optimism means believing that regardless of what happens, you have the means within you to be okay.

“We should believe in our resilience as human beings, that no matter what we experience, we can be okay,” says Stephanie. “It doesn’t hurt to believe that there’s good, even if it's hard to find.”

Do I have to change?

The short answer: change is a part of being human. It’s constant and it’s everywhere. There’s really no avoiding it. Maybe it’s better to look at it as evolution, not transformation. Think replacing the tile in a bathroom, rather than doing an entire Property Brothers house flip. We’re not becoming new people, but improving small spots, becoming slightly more genuine versions of ourselves.

“We have no control over our external circumstances, but we have to control how we show up,” Annie says. “We can focus on what kind of person we want to be.” That’s the beauty of it. Changing lets us be ourselves.

“Change can be really scary because it's hard to abandon what we’ve known to be true of ourselves our whole lives,” says Stephanie. “But if what you get out of it is to be a more authentic version of yourself, you’re worth the effort and the challenges.”

“You won’t be perfect,” Annie says, which makes the perfectionist in me grimace. “Navigating through change can be difficult. Start small and do it in a way that feels natural for you.”

By working through change in small steps, it becomes natural. When we’re changing, we’re learning. No one learns to play the piano by starting with Mozart.

“Stick to the facts,” Greg says. “Be practical. Be real with yourself. Understand who you are.”

Set yourself up for success by understanding what you’re capable of and who you want to be. If you’ve never cooked before, don’t expect to bake a perfect croissant on the first go. Start with scrambled eggs. Or toast.

“It really just starts with believing that you deserve that change, and it just unfolds organically,” Stephanie says.

Instead of the resolution:

If you, like me, still don’t love the idea of making a list of resolutions, here are some ideas for what you can do instead.

Pick a word, Annie says. “Joy or bold or fun or confident. Use that as your north star for the year. Whenever you need to make a decision, use that word to guide your choice.”

Set intentions, Stephanie says. The phrase is less intimidating than “resolution”, but the idea is the same. If there’s a spot in your life where you feel you’re falling short of who you want to be, make the decision to intentionally work on that spot.

For me, it’s about small decisions. Not going vegan, but getting oat milk in my coffee. Journaling when I have a lot on my mind, but not telling myself I need to do it every night. Things seem to fall into place after that.

I’m not a different person than I was last December. But, I’m constantly growing and that’s something worth celebrating. 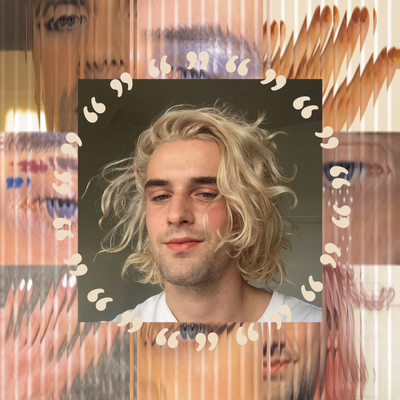