Are queer people the gatekeepers of beauty?

“Sorry but this tokenization of non-binary aesthetic by straight cis boys has me heated,” wrote Dear Evan Hansen star Ben Levi Ross on his Instagram stories to his nearly 85,000 followers.

It was below a picture of actor Ansel Elgort who sported glitter makeup and white nail polish at Sunday’s 2020 Golden Globe Awards. “If you’re not outspoken in supporting the rights of trans and non-binary people, you may not put on nail polish and makeup now because it’s ‘on trend.’ You don’t get to simultaneously stay silent on the more than 25 trans people that were murdered in 2019. You can love the way we look and also stay silent when we are killed. Goodbye.”

In a follow-up slide he continued: “At the end of the day this is just so frustrating because I’m sick of straight people stealing aesthetics and then being applauded for their ‘bravery.’ Bravery is walking out of your house as a queer person everyday and experiencing the possibility of harassment and yet still living and thriving.”

Were people really calling this brave, I wondered. I did an immediate search of Ansel Elgort’s name and “brave” on Twitter. There was one tweet in total from GQ’s Joel Pavelski that featured a close-up shot of Elgort’s face with the accompanying text: “Ansel Elgort walked out of his hotel room thinking this was brave and good,” the tone of which was clearly mocking. I thought perhaps there would be other references in the news stories this simple act would surely garner.

“The actor added an extra hint of glitz and glam to his red carpet look with a dusting of prismatic silver glitter on the inner corners of his eyes,” wrote Allure. “The actor rocked a glittery light blue eyeshadow in his inner eye that served some major drama for the paparazzi,” wrote E! Online. “Can’t wait to see more from Ansel if this is the direction he’s going in with his fashion choices!” wrote BuzzFeed.

I say, the more glitter liner and the less toxic masculinity the better.

I went straight to the source, asking Ross where this outrage was all coming from. “The reaction from what I’ve seen were a lot of queer people unabashedly loving him and this look and saying that him wearing make-up alone was a form of allyship because he was giving a big middle finger to gender norms,” he explains. “Why that bothers [me] is that I feel like we’re holding him to too low of a standard if he really is the ally he says he is.”

From Ross’s perspective (who identifies as gender nonconforming and uses he/him/they/them pronouns) the issue was less about Ansel and more to do with the reaction from the LGBTQ+ community. The larger question posed was this: Was Ansel appropriating queer culture without being outspoken about the community? Are queer people the gatekeepers of beauty? Does anyone ~own~ beauty?

The answer isn’t so clear.

“Honestly I second what Ben Levi Ross said,” hairstylist Dee TrannyBear, who identifies as transgender and gender nonconforming, says. “Things will never change if we don’t start calling out all these terrible systems that are put in place.”

Detox, drag legend, disagrees. “For a community that celebrates individuality and self-expression, I think there’s room for us to be supportive of that in others as well. I say, the more glitter liner and the less toxic masculinity the better.”

For David Lopez, a celebrity hairstylist and beauty expert, makeup and cosmetics belongs to no one and everyone at the same time. “I feel makeup has been adopted by the queer community as a form of gender expression and a political statement,” he tells Very Good Light. “In its purest form, makeup is there to help enhance and bring confidence to someone. It’s a form of expression across all communities and cultures.”

Still, I was curious how the simple act of painting one’s face with glitter could somehow be characterized as “straight people stealing aesthetics.” Could Ross have a point? Is gender-bending a new, 21st-Century phenomenon amplified by cisgender, straight male stars ranging from Pete Davidson’s painted nails to BTS’ eyeshadow? Is a feminine look, whatever that means, more accepted because of said men adopting it as fashion?

“To be real honest, queer people kind of do own make-up,” Ross clarifies. “It’s like because Ansel is straight and cis, the make-up and nails are more palatable.”

But men of all sexual persuasions and gender identities have been wearing makeup throughout time. Powerful people throughout history have prescribed to beauty those like Louis XIV, who had multiple female lovers and started an entire wig trend, to ancient Egyptians who painted on eyeliner as a symbol of power and royalty, to Romans who painted their nails and wore blush before battle. Hell, even our Neanderthal forefathers from 50,000 ago were found to beautify with foundation and highlighters. Yes, highlighters.

Makeup as a means of expression isn’t a 20th Century phenomenon, nor is it for one culture or another. If history says anything, makeup has been used by all people from the beginning of time.

But Ross would disagree. “What this comes back to is how right now make-up is so directly attached to gender expression,” they say. “So I think that if [Ansel’s] choosing to walk out onto one of the biggest red carpet events of the year with a flashy look and chooses to stay silent, it’s not only a missed opportunity to show his allyship, but feels like an offense to the community he’s most definitely drawing inspiration from.”

Flashy? It’s a smidge of glitter. Chooses to stay silent on what exactly? One can dig Ansel’s light beat without thinking he moved the needle on gender expression. Perhaps less energy expended on the handful of people (allegedly) asserting this as an act of allyship, and more effort towards removing any kind of hierarchy or stigma around who owns makeup.

Personally, I’m not comfortable telling the LGBTQ+ community what they should and should not feel in any given situation — especially as a cis gay white man, the least marginalized within the community. Do I think this is misplaced outrage in this particular situation? Yes. Do I understand the root of that outrage, looking at the broader ways in which a cisgendered, straight man is afforded the agency and privilege to wear makeup without the risk or fear that comes when many within our own community do it? Also, yes. And therefore I don’t think it’s wrong to look at this and react with anger as long as there’s a welcoming/productive discourse.

But I will conclude with this: if history has a say – and culture, too – we need to acknowledge that no one owns make-up. It’s all of ours to keep. Yep, that means, you too, Ansel. 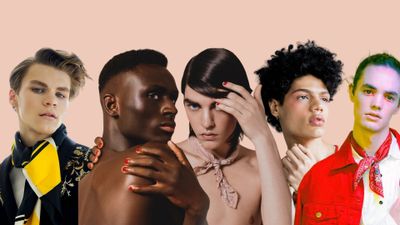 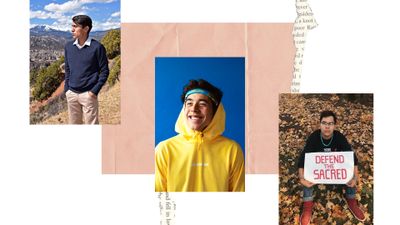