In the outlet’s November “The New Masculinity Issue,” dedicated to men across the masculinity spectrum, GQ attempts to highlight what they believe to be 21st-century trends surrounding masculinity (Editor’s note: David Yi, Very Good Light’s editor-in-chief, was interviewed for GQ’s November issue but his interview was omitted).

“We’re not attempting to be comprehensive on the subject of masculinity or offering a strict how-to for being a better man,” admits GQ‘s editor-in-chief Will Welch. “Instead, this issue is an exploration of the ways that traditional notions of masculinity are being challenged, shifted, and overturned.”

At face value, this is powerful. For GQ, a publication that has been a major voice of hypermasculinity, promoting overt machismo, sexism, and chauvinism, throughout its history, it’s as if in this singular issue, they’re looking to right some of the cultural wrongs they’ve had a hand in creating via toxic masculinity.

But considering that GQ, and its parent company Conde Nast, are for-profit businesses, the intentions seem less altruistic and more like a capitalistic proposition.

Very Good Light understands that younger consumers are no longer responding to masculinity in the ways of generations past; masculinity is on its way to change for good. Titan brands like Gillette are asking for men to change in a bold way. Pop culture figures like the cast of “Queer Eye,”  Billy Porter, Harry Styles, and BTS are showcasing different sides of masculinity.

[Makeup] isn’t just drag, it isn’t solely for women, it isn’t an act of “bravery.” Many people aren’t even using it to stand out; they’re using it to blend in.

According to Allied Market Research, men’s makeup is now purported to be a multi-billion dollar industry, expected to hit $166 billion in 2022. We’re also seeing the next generation of consumers becoming more interested in gender-neutral beauty products to serve their own blurring sexuality and gender identities. To stay afloat and become relevant, GQ seems to have found itself in a quandary. Do they pivot into what culture has become, while perhaps alienating their current readers, or do they remain the same and become forgotten?

“To millions of men, skincare and cosmetics is an everyday part of their life. It isn’t drag, it isn’t for women, it isn’t an act of bravery.”

Insiders tell Very Good Light that in the months before publishing its current issue, GQ’s very own editor-in-chief was getting cold feet. The issue was supposed to hit newsstands for September, but according to sources, Will “wasn’t into this masculinity stuff.” The source says that the issue was being “dragged along” and that there was no enthusiasm within the top editors. It’s no surprise, as most who hold the keys to power at GQ are cisgender, straight men, viewing this movement of “new masculinity” through a very narrow lens. .

For instance, the headline of one article, “The Glorious Now of Men in Makeup,” is uncomfortably dated. The subhead doesn’t help, either: “One day we’ll look back on the era when makeup was only for women and think: Huh?”

Not only is GQ’s insistence on gendering makeup reductive and sexist, it fails to acknowledge the millions of men who already use makeup from the subtle – CC cream and shaded brows – to the full face beat, and everyone in between. For millions of men, skincare and cosmetics are already an everyday part of their lives.

It isn’t just drag, it isn’t solely for women, it isn’t an act of “bravery.” Many people aren’t even using it to stand out; they’re using it to blend in.

Like we’ve seen with the ways race and sexism have been treated recently, this “new” look at masculinity feels like a way for people in power to get credit for inclusivity without investing anything in the actual conversation.

Also, makeup never has been “only for women.” For centuries, men have beautified to amplify their power. Neanderthals ground up pyrite and seashells to make a kind of glitter back in 50,000 B.C. Vikings, some of the original beauty boys, carried grooming kits with them wherever they traveled. In 1250 B.C., Egyptian pharaohs used kohl eyeliner in golds, blacks and emeralds to exert their power. Alexander the Great wore blush and nail polish before battle. A Korean assassin clan, known as the Hwarang from the sixth-century Silla dynasty, were chosen for their beauty and used colored cosmetics as a spiritual practice. The list goes on and on and on. So, to casually relegate makeup to a gendered frivolity is not only misleading, it’s just plain wrong.

Mainstream media outlets like GQ seem to be capitalizing on a trend and proclaiming it new just because they’ve only now gotten the courage to cover it. Like we’ve seen with the ways race and sexism have been treated recently, this “new” look at masculinity feels like a way for people in power to get credit for inclusivity without investing anything in the actual conversation. And it’s nothing new in the beauty and fashion worlds: taking steps to woo a new demographic of consumers (or at least signal to them that they are aware they exist) without offering a seat at the table to the people they are hoping will pay up.

It’s Columbusing at its finest: “discovering” us beauty boys without inviting any of us to participate in the conversation.

It’s clear that in publishing this issue, and this “male makeup” piece specifically, GQ was hoping to make the least possible effort in order to reap the greatest possible return: cultural credibility. They want this story to go viral, to add it to their catalogue of ways that this era of GQ is “new,” but they don’t actually seem to care about the realities of boy beauty. They’ve taken no risks.

Rock icon Billy Idol has been wearing makeup since the 1970s. Nothing new there. Luka Sabbat, one of the token GQ “cool guys” of the moment, had a Milk Makeup contract last year. Jackson Wang is possibly the least makeup-forward of all the K-Pop stars, and, even so, makeup for men is quite common in Korea. Also his proclamation that “a neutral colored tinted balm is really comfortable to wear” is far from revolutionary or revelatory.

While it’s clear GQ is evolving, this story (and the issue as a whole) doesn’t cut it because it isn’t authentic. It still reads as masculinity through the eyes of straight, cisgender white men who view makeup as feminine, beauty products as women-exclusive, and cosmetics appropriate only for over-the-top editorial campaigns.

It’s Columbusing at its finest: “discovering” us beauty boys without inviting any of us to participate in the conversation – going so far as to erase us completely.

But we don’t need GQ and its narrow-minded editors to give us permission to partake in beauty. We didn’t ask for them to write up a “Masculinity Issue” to make themselves feel relevant. We didn’t need another lazy beauty spread of garish, made-up men.

Because for millions of people out there, this as been their reality for years.  What we need is a place to share our real stories, where we can feel heard and supported. Where our habits, our interests, and our passions aren’t appropriated. This is not it. 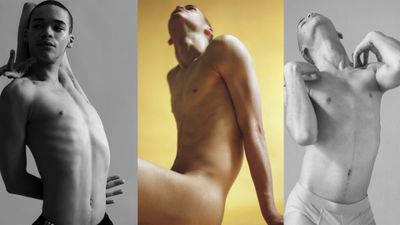 
3 dancers on their glow-inducing skincare regimens


Glossier’s new Future Dew turned me into a glow god 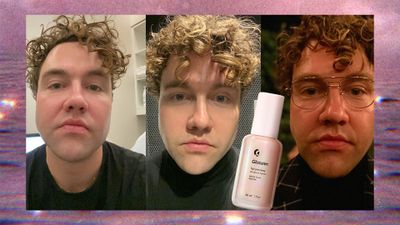