Jai Rodriguez just got into an accident.

Well, a small one. The top antenna that connects to the car’s “radio thing” just came off after coming out of a parking garage and its low ceiling. “I’m really fortunately though that I’ve never had any massive accidents since I’ve been here,”  he says, over the phone.

Indeed, the native New Yorker has transitioned into full-time West Hollywood resident after becoming one of the Fab Five members on the original Queer Eye. Except back then, it was called Queer Eye for the Straight Guy on Bravo. For those who were too young, the original was a sassy Bravo show with more or less the same premise: five gay men dubbed the ‘Fab Five’ who went into the homes of straight men to make them better. The result: a successful Emmy-winning show that became a national sensation. But whereas the show was all about tolerating the LGBTQ+ community – and as some would say, making them into caricatures – the reboot is all about embracing gay individuals.

Today, the Queer Eye stars have become their own brands with millions of followers. Stars like Jonathan Van Ness are now household names, while guys like Antoni Porowski not only have cookbooks but just became one of People Magazine’s Sexiest Men Alive.

But for the original Queer Eye stars, fame hasn’t given them the same privileges. While they’re remembered for their time on the show, none have remained in the public eye.

“I’m jealous of the boys and their social media base,” Jai tells Very Good Light from Los Angeles. “They went from a couple to a couple million. I wish we had that ability to organically grow out base as well.”

When the original debuted in 2003, it was revolutionary. Never had there been a reality television show that featured five gay men on a regular basis. It allowed America to tolerate gay men and see that they weren’t so different from themselves. At only 23, Jai was the youngest among the cast, which included Ted Allen as the “food and wine” expert, Kyan Douglas as the “grooming guru,” Thom Filicia as the “”design doctor,” Carson Kressley as the “Fashion Savant” and Jai as the “culture vulture.”

“I remember in our show we had full Republican support, we’d go to frat houses, there was no hateration,” Jai recalls. “All the guys were met were like ‘’we love the gays they’re so funny and I love them but we don’t want them to get married.'”

It’s of course, different from 2019’s Netflix version where gay men aren’t only tolerated for who they are, but embraced. The modern day show is powerful in that it’s vulnerable, and stories tug at the heart, a little different from 2003’s, which was snarkier and more comedic. “Our cast was a cast of comics and it was a sketch show that won hearts over,” Jai says. “This show is a grab-your-Kleenex-every-episode, which I do appreciate.”

What Jai doesn’t appreciate is how Netflix is distancing the show from the original. “I think in the beginning they [Netflix] needed to brand the new guys as the new cast, which I get,” he says. “I wish they’d do a special and would reconsider doing an episode with all 10 of us. I understand that it’s been years since our show but you’re never going to take one of the Queer Eye Fab Five away from any of us, from me.”

And while the new cast seems to be raking in the dough, it wasn’t the same for the original cast. “They assume we made millions and millions,” Jai says with a laugh. “We made under $10,000 per episode even after the Emmy we won. I was a child in many ways then so I didn’t know better but I should have spoken out more.”

Today, Jai says it’s all love. The Fab Five – all ten of them, old and new – are all on a group chat. Each sends congratulatory messages when others come out with new books or initiatives. “It’s a fraternity even if we don’t get to work together, we’re appreciative that the legacy is carried on.” He’s also moved past Queer Eye, becoming a working actor in Hollywood. Recently, the 40-year old was just seen opposite Kay Dennings on “Doll Face,” a comedy on Hulu, after having an extensive resume of rolls from Nip/Tuck, How I Met Your Mother, Bones, to television hosting. He also hosts one of satellite radio’s first LGBTQ radio shows, “The Morning Beat,” with Mikalah Gordon.

“I think after all these years my mission is still the same as it was,” he tells Very Good Light. “Navigating the queer experience and uplifting voices, allowing others to be visible, and empowering is more important than ever before. I hope that I can continue doing that.”


8 new face oils to upgrade to 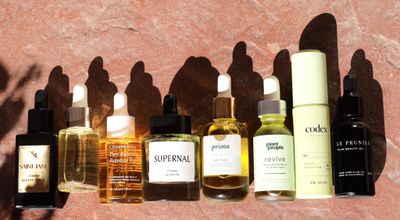