There are many a resolution you’ll make before the new year.

And 10/10 times you’ll probably forget what your resolutions even were. Like, in 2014 mine was certainly probably maybe having to do with working out more or eating more greens or being a better citizen on Earth or some s***. By Valentine’s Day, I totally forgot it was even the new year and that I even made a resolution. So instead of making silly resolutions that NONE OF US will adhere to, what about a few things we all can try leaving behind in 2017? Here’s to eating more not greens in 2018!

1 I won’t obsess over drinking water.

Because you don’t need to. Studies show that Americans are getting an “adequate” amount of fluids into their system whether it’s from sodas, soups, or other liquids. Meaning, ALL fluids count. Unless you’re someone who doesn’t drink or slurp on anything in general, you really don’t need to intake gallons of water for your health. Actually, drinking too much water can lead to something called hyponatremia, a condition where you have too low of sodium in your blood.

Instead of shoving a muffin down your throat or waking up 15 minutes earlier to force-feed yourself a morning meal, why not just do your own thing and skip it altogether? Studies show that there is ZERO conclusive evidence that eating breakfast makes you any healthier. In a new study, eating breakfast does not boost your metabolism nor does it make you lose weight. In fact, skipping breakfast can be ~healthy~ for you. It’s because of something called “intermittent fasting,” which goes by a 16/8 method. You fast for 16 hours and eat during an 8-hour period. It’s proven to actually boost your metabolism.

Swearing is ~actually~ good for you, says a study by Time magazine. We can all let out a f*** yeah scream now. A study by psychologists in England showed that swearing was harmless, a creative emotional release, and makes one feel stronger. So the next time someone tells you to stop using the “F” word, you know what to do. 🙂

Sure, you may lose weight, but it’s temporary, a study shows. Meaning, you’ll shed some pounds but you’ll gain it back the moment you get off of it, which is unhealthy to yo-yo back and forth. It leads to cardiovascular problems, type II diabetes, high blood pressure and more. And no surprise: it’s bad for your mental and emotional health. Instead of going on some fad diet, starting incorporating healthier options to make it a habit, not something that comes and goes on a whim. So yes, you can put down those kale chips (unless, of course, you genuinely love them).

Pimples, blemishes, acne, oh my! While we may shy away from the world when a pimple starts to form, we need to start rethinking why we even do that? Who’s to say that your natural, blemish-prone face, one that could be red, or hyperpigmented, or oily, isn’t beautiful? Sure, we strive to better or skin condition, but confidence really does start from the inside out. So now’s the time to hug your own skin and feel better about it. It’s the only one you have, so start loving every inch.

6 I won’t compare myself to others.

In the age of social media, where everyone seems to be living their best lives on Snapchat, it’s almost impossible not to compare your life to others. But it’s extremely unhealthy for your mental and emotional health. How unhealthy? A study by Psychology Today says comparisons can lead to depression and ultimately suicide. So instead of thinking how so and so’s life is better than yours, start valuing your own path, your own unique life, and how beautiful it is because

7 I’ll refrain from over-filtering my selfies

FaceTune 2. Snapchat doggy filter. Photoshop. Whatever it is that you use, it’s time we stop over-filtering and showing our true selves on our social media. Of course, this is tough, especially when everyone else looks flawless with their translucent complexions or 12-pack abs in Tahiti. It’s no wonder, then that a German study found that 82% of people would rather see authentic photos rather than those that are way too filtered and inauthentic. The same study found that there are potentially negative consequences of seeing so many inauthentic selfies on social media. So it’s time to get your freak flag out to start taking photos of your ~true~ self, duck lips and all.

Bodyshaming is real. And oftentimes we do it to ourselves. As guys, it’s something unspoken, but there are so many insecurities we all go through. Whether it’s working out way too much, working out way too little, over or under eating, guys are obsessed with their physical appearance. So much so that one study suggests that when it comes to body image, guys are more insecure than women are. Let us practice self-love in in the new year and start to love ourselves wholly, beer belly, skinny arms, flabby skin and all.

9 I’ll stop talking negatively about myself and/or others.

It’s been a tough year for many reasons. Though we can’t control what’s going on in politics, school, or our jobs, we can control how we perceive them. Instead of downplaying our own accomplishments or talking badly about how we’re not worthy, it’s time we practice self-love and pat ourselves on the backs from time to time. Equally, we need to extinguish negative talk or energy altogether when it comes to others. Comparing our lives, as notated above, isn’t healthy. But neither is speaking badly about other people. It’s time we edify, empower, and elevate ourselves so that we have a better tomorrow. The world needs positivity and every last word or act counts. 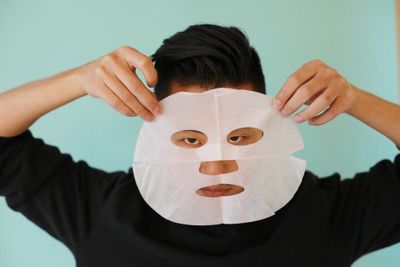 
The easiest guide ever to Korean Beauty for men