Does No Shave November exclude an entire group?

There’s an entire month out of the year where East Asian men are forced to confront their own Asianness.

It’s a month called November, that is, 30 days out of the year where men are encouraged to grow out their facial hair for a good cause. How they’re related, we don’t really know. There’s No Shave November, which encourages men to grow hair for American Cancer Society. Then there’s Movember, an organization started in Australia, which promotes prostate cancer awareness.

SEE ALSO: I’m an Asian American male and I have major beard envy

While 30 days come and go, with the American population of guys flaunting their scruffy ‘staches and bushy beards all over social media, 99% of East Asian guys like me wait on the sidelines and awkwardly wait, hoping and praying for our upper lip fur to sprout (spoiler alert: it doesn’t.)

As a Korean American, I actually have the capacity of growing more facial hair than the average East Asian dude. That’s like, 30 hairs instead of three. At the end of two weeks of no shaving, my face looks as if it’s been replaced by actual pubic hairs. Not the soft, shiny, fluffy pubes, either. I’m talking about prepubescent prickly strands that resemble a dead rat’s coffin at its funeral.

Which is interesting being in Seoul. Here, men seem to be allergic to any semblance of body hair. One walk around the streets of Seoul will prove just how clean shaven, smooth and youthful Seoulites are. The standard of beauty for Korean is a clean complexion, moisturized skin, and free of wrinkles. Korean men’s facial hair and body, therefore, is something almost grotesque, features that make a man barbaric. It reminds me of an interview from 2011 with the Kpop star named G.O., the leader of the now disbanded MBLAQ. In an interview, he revealed just how insecure he was with his facial hair. So much so, he debated getting laser surgery to remove it completely.

“I became a slave to that facial hair,” he admitted. “When I went on variety shows, I only got to talk about facial hair. I also have a lot of hair on my chest, so whenever I’d wear V-neck shirts, people joked that I could clean the floor with it.”

The adverse feelings towards facial and body hair are only buttressed by the messaging throughout men’s grooming sections in retailers. When I visited one called Olive Young, I was intrigued at the amount of products designed to get rid of hair. There was an entire top shelf full of leg trimmers, for instance. Each of them was marketed with cartoons of how women react to men with leg hair. The ‘before’ illustration has a red-headed woman scrutinizing a man’s hairy legs and screaming “NOOOOOOOOOH!!!!” The ‘after’ is of a man with hairless, smooth legs with the same red-headed woman fawning over him. “It’s Cool!!!!” she apparently says. Another product next to it has a similar illustration. A blonde woman says “no thanks” to a hairy man while she accepts the smooth guy, saying “I love it!”

It’s all utterly, ridiculous, of course. But it’s oddly refreshing to know that my natural smooth body is finally seen as sexy somewhere. That I’m the standard of beauty. That Korean men’s facial hair is the standard of beauty. After years of being insecure at my rather hairless complexion and body, it’s a strange feeling to know that my Asianness in all its hairless glory, is not only accepted, but perceived as sexy. Ali Wong was onto something when she described her furless husband as being sexy AF. “It’s like having sex with a dolphin,” she joked.

Through it all, I’ve concluded this: beauty is relative. Whether you’re the furriest of bears or the smoothest of twinkle-toed twinks, whether you can grow the burliest of beards for Movember or become the smoothest of Kpop stars, it all doesn’t matter. What does is how you practice self-acceptance and love. Because when you carry that confidence with you it shows. And that’s sexy, no matter the culture, place or standard of beauty, or if, like me, you have all of 30 whiskers.


Why your men’s beauty brand sucks.


How actual Koreans think about Kbeauty will surprise you 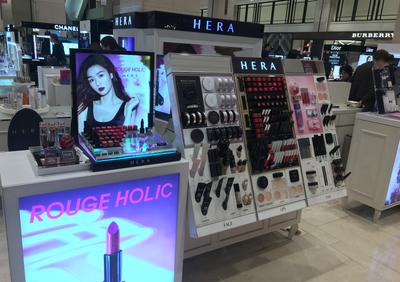