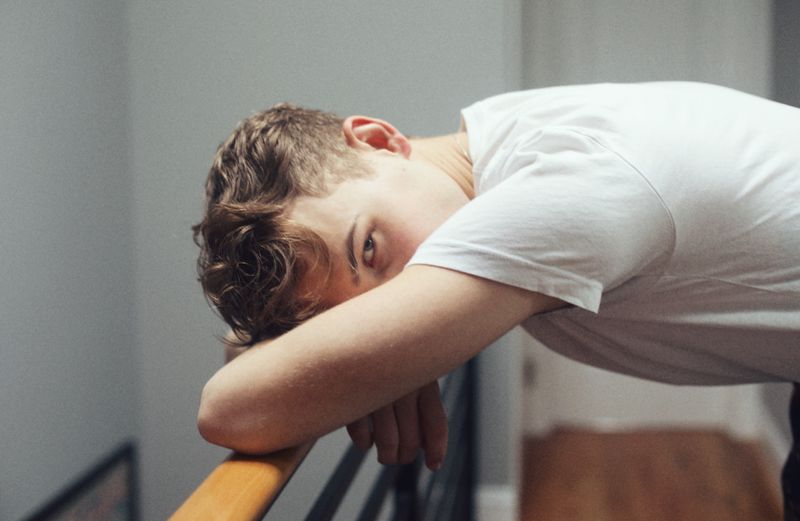 “My hair was dyed every weird color and I was obsessed with the Spice Girls,” says Tommy Dorfman, the actor who’s starring in the much hyped Netflix series, 13 Reasons Why.

We’re at his Brooklyn duplex going over his massive beauty closet where we’re greeted by his friendly pit bull and his husband of over a year, Pete. Tommy, who’s 24, sports a Gucci top and matching jeans. His hair, just washed, is soft, wavy and perfectly messy. The entire look is completed with his nails, painted in an iridescent pearl, recently manicured at a salon on Greenwich and 13th in Manhattan.

Tommy’s about to have a huge year. The show, a television adaptation of the 2007 novel by Jay Asher, is executive produced by Selena Gomez, and makes its big debut Friday. The story centers around a high school girl named Hannah, who leaves behind a few recorded tapes as suicide notes explaining to 13 students why they led to her death. Tommy plays Ryan, the outspoken LGBTQ+ activist at a high school.

“He’s very academic and is ready to leave high school and go off to Harvard,” he explains. “He’s also very entitled and not afraid to call out people on their bullshit.”

It’s a role, he says, that he could empathize with, but one that’s completely different from who he is. “Ryan is very confrontational and I’m not at all. I’m more passive, for better or for worse.”

An aspect that Tommy admires about his character: “He’s an activist and I never was one. I had friends that were very involved in different groups fighting for racism or homophobia. He’s fearless and I’ve learned to become more of that.”

I want to fight for everyone, it’s become who I am.

Since, Tommy’s become super involved in activism, from the Women’s March in February, to planning his own march for Planned Parenthood. Tommy brought together a massive crowd on his own, even speaking in front of hundreds and explaining the importance of women’s rights.

“I want to fight for everyone, it’s become who I am,” he says.

Which is what he wants to do for the LGBTQ+ community as well. As an openly queer actor, Tommy says he’s been met with resistance, but sees it not as an obstacle, rather, a challenge.

Recently, Tommy met with an agency. Immediately, he was met with an agent who told him he was a difficult sell. “I can’t work with you because I don’t think you’ll make money,” he said.

Selena was super positive on set and is an overall amazing person. She’s very professional and the kindest, treating everyone from the craft service people to the director all the same.

“I was like, okay, cool, bye,” Tommy recalls. “It’s 2017 and I’m not at a place where I would ever sacrifice myself in that way. If I want to paint my nails or wear something in a certain way, cool. It’s more important than ever to be more open.”

His big goal? He wants to work on a large scale gay rom com. “Can Matt Bomer and I do something? I mean, why is that not a thing? We need to make this happen.”

As for now, Tommy is taking his career one step at a time. He says he looks up to Selena Gomez for inspiration. Her work and personal ethics were something he was extremely impressed by.

“She was totally hands on,” Tommy says of Selena. “She was super positive on set and is an overall amazing person. She’s very professional and the kindest, treating everyone from the craft service people to the director all the same.”

A couple weeks ago, Selena hosted a dinner for the entire cast. It was there that Tommy was able to really get to know her. “I think with celebrities you have your own conceptions of what they’re going to be like and your own made up relationship with them. What my idea of her and being new in this industry made me realize that you can’t judge a book by its cover. She’s the most humble, most intelligent, most kind person I’ve ever met.” It’s a lesson Tommy hopes to incorporate in his own career, which is only about to sky rocket.

Here’s a look into Tommy’s beauty closet and how he grooms:

Face wash: “I wash my face with a really all-natural face wash from Evan Healy. It’s very milky and for all skin types. It’s slightly foaming but simple, which is great. It’s gentle on my skin and good for mine since mine can be sensitive.”

Moisturizer: “I then use a moisturizer and SPF from Elta MD. I’m very scared of the sun. We have a lot of genetic cancer in my family. Other than that, being sunburned is the worst.”

Eye cream: “The Little Barn carrot seed eye cream roll on is a game changer. It’s from this place in Maine. Makes your skin super tight and bouncy.”

Highlighter: “I’m wearing the Glossier Haloscope in Moonstone. I have both Quartz or Moonstone and love the highlighter. I use I think just when I’m going out or a photoshoot to bounce that light off and become dewy. I’m a big fan of the dew. I also will use Balm dot com as a highlighter or on your eyebrows for shine.”

Exfoliator: “At night I’ll exfoliate twice a week at night I’ll do the YSL exfoliator. It’s super light and not abrasive.” 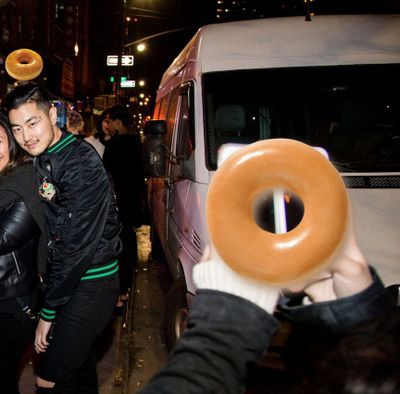 
I love donuts so much I glazed my face like one 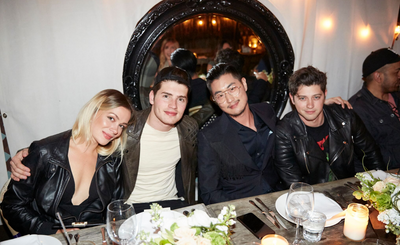