Inspirational teens. They’re everywhere. They’re pushing culture forward and changing the world for the better. Like Hennessy Vandheur. He’s an 18-year old who went from being homeless, to becoming an in-demand photographer. He’s not only making a positive impact on the world, he’s proving that no matter your circumstance, you can win. Want to nominate yourself or someone else? Contact us at info@verygoodlight.com.

When I was 5-years old, my mother and I moved to California from Indonesia. Immediately, I was amazed by how everything was readily available here, unlike the third-world country I had just left behind. Initially, we lived in a small apartment in Downey, a suburb in Los Angeles. I would look out the window and see everyone just doing their thing. It was so different from Indonesia. For one, it was clean. Indonesia, by contrast, was very dirty and polluted. People here were actually happy.

We came here on a tourist visa and left my dad behind. As a child, I didn’t remember too much about him, but my mother would constantly tell me that he wasn’t a good person. She soon remarried but my stepdad wasn’t any better. He started off kind but quickly turned into a strict bastard who often beat me and my mom. It was so bad that to this day, nothing else can easily faze me because I spent my entire childhood developing a thick skin.

In America, we overstayed our welcome because my mother never bothered to get me my citizenship. I didn’t realize I was an illegal immigrant until I was 14-years old when a social worker told me the truth about my life. Around this time, my mother started going through extremely hard times. After a divorce with my stepfather, he took everything we owned and left us with pennies in our pocket.

My mother became depressed and easily ticked off. Home turned into an atmosphere so rife with tension that it felt like a bomb was about to explode at any second. Little things like not washing dishes or forgetting to take out the garbage would destroy any connection we’d manage to rebuild and leave her yelling at me for hours. One day, she grew tired of me and told me to leave the house because she couldn’t deal with me anymore. It was the middle of my sophomore year and I was suddenly homeless.

I slept in restaurants and I slept on benches. This went on for an entire month until my friend found out and told me come stay at her house. Eventually, my mother reached out and told me to come back home. I came back and stayed for one night – the next morning, social services was knocking on the door. By the end of the day, I was admitted into the system and put into a facility for “disadvantaged” youth.

I was depressed. I didn’t feel like anyone loved me. It was around this time that a friend’s family bought me my first iPhone – a sky blue iPhone 5c, to be exact. The photos I took on it were decent enough to get me hooked on photography. I started snapping photos here and there while skateboarding around town.

One day, I climbed onto a rooftop in downtown Los Angeles and looked over the ledge. Things were still bad in my life and I remember thinking like, “damn, I can fall off and end it all. I don’t have to be hungry and I don’t have to live without love anymore.”

The city was twinkling. I had the iPhone in my hand ready to take a photo and thought to myself, wow, this is such a beautiful world and there’s all these people living life underneath me. If I didn’t have anything to live for, I thought, at least I had these beautiful things and people to photograph. I stepped away from the ledge. At that moment, my photos saved my life.

If I didn’t have anything to live for, I thought, at least I had these beautiful things and people to photograph.

By this point, I knew that photography was something that I was good at. I’d take photos of flowers and the sky and plain things anyone would take in passing. I started taking photos of mountains and city streets, beaches and trees. I’d take photos while hanging out with my friends. My social media grew and I started gaining attention for my iPhone photos, people hitting me up to hang out or have me shoot their portraits. I started photographing some girls I dated and went on to shooting bloggers and models. My body of work changed from shooting landscapes to shooting people. I was hooked.

I lived with my best friend and his sister for the next two years until they moved. Not knowing where to go, I made ends meet with my photos and lived in a tiny apartment with another foster kid. It was difficult. At 17-years old, I was hungry, depressed again and didn’t know what to with my life until my high school art teacher came into my life like an angel from the heavens. He helped mentor me, putting my work into district art shows and teaching me how to see the world in a different way.

After hearing my story, he and his family decided to take me in as their son. I lived with them for a year. I was still shooting with my iPhone because I couldn’t afford an actual camera, but that was soon remedied; one of my art teacher’s friends in New York heard about my story and sent me his old Canon T2i. That was a defining moment. The moment I picked up that camera, tears came out my eyes and I knew it would change my work. And it did.

During my time living with my art teacher, I spent every day I could taking the bus four hours a day to Los Angeles. Before I received the camera, I’d get little photo gigs and people would be taken aback that I’d come to set with just an iPhone in hand.

A lot of people started hitting me up from seeing my social media. One of them was this guy who made YouTube videos named JC Caylen. I photographed him in Hollywood and we quickly became friends. He posted my photo and had 2.5 million followers at the time so my social media blew up.

From there, more people reached out to me to shoot, and I became immersed in the LA scene, shooting with social media kids and partying meaninglessly until, one day, I read a book about the work of Richard Avedon. His photographs blew me away – I was amazed by the sheer emotion and substance that he was able to construe in a single photograph. From that day, I vowed to start shooting with more passion, more heart, more emotion. I left the LA scene that was, to me, turning very superficial and shallow.

One day, I was hanging out in my room with this girl I was dating at the time. We both shared a deep love for this new musician named Gallant’s music. We were just sitting there in my bedroom listening to him when she turned to me and said, “you should hit him up and photograph him.” I was like, shit, why not? So I looked him up, found his Instagram, and I commented: “I’d love to work with you man. Your music speaks to me.” I didn’t think anything of it.

A couple of weeks later, Miles, his manager, direct messaged me saying he wanted to meet me. It was after the holidays when they gave me my first job – to shoot a new artist named Stephen (whose music I coincidentally was in love with too). He was actually the second shoot I ever had with the new camera. After the shoot, they really loved the photos and told me that these would be setting his aesthetic for the future.

The management was like, ‘We’re using these photos for the album release.’ They were really pleased with the results so they reached out to me a month later to photograph Krewella. With Krewella, that was really crazy for me. I remember skating around at 14-years old when I first started taking photos, I’d listen to Krewella’s music to get through the pain. I was probably one of their biggest fans as a kid. Still am. It was like coming full circle. After Krewella, they finally had me photograph Gallant. He was the entire reason I had gotten to this point. It was a breaking point in my career. That shoot led to a lot more work and an introduction to NEXT Models Management. I began shooting tests for the agency, and pushed myself as hard as I could to constantly better my work as I changedTmy focus towards the fashion and editorial side of photography.

They finally had me photograph Gallant. He was the entire reason I had gotten to this point. It was a breaking point in my career.

Now, I’m 18-years old and a student at Parsons. I’m studying photography and striving to break barriers and develop my work further every day. I’ve reconciled with my biological father who found me through an article a newspaper had written about me. Turns out my mother was wrong – he wasn’t the asshole she painted him to be. We’re on good terms now and he’s helping me with college. Turns out that he’s a photographer as well. He gave me his Leica, one of my most prized possessions. I’m still broke (what struggling artist in New York City isn’t?) but I’m happy now, and I’m doing what I love every single day of my life.

When I think about life, there’s no obstacle that is too big to overcome.

When I think about life, there’s no obstacle that is too big to overcome. None whatsoever. If there’s something in your way you gotta move it. You gotta keep moving. You gotta move that mountain. – As told to Very Good Light


What does it mean when straight men sleep with crossdressing men?


Holy zit! What to do in a pimple emergency 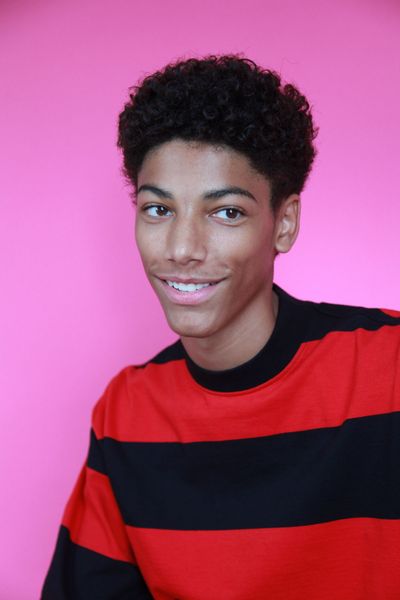