You might have seen Shaun Ross on a billboard, a runway, or a music video.

He’s a triple threat touching on multiple routes of creativity as a model, musician, and actor. The New York native and first-ever African-American male model with albinism sat down (via Zoom) with Very Good Light to talk about his experiences with tokenism, making music with intention, and toxic masculinity.

Shaun is aware that his platform of over 600,000 followers on Instagram carries with it the weight of responsibility when it comes to the modeling industry. He’s one of the only prominent models with albinism.

“I was talking to a friend the other day and we were talking about certain things in the industry, how a lot of people aren’t usually able to speak on,” he says. “I think that being a public figure holds responsibilities and I knew that getting into the industry that I would have a very, very big responsibility in general just existing as a person.”

On diversity, representation, and tokenism

Shaun’s journey in the modeling industry revealed to him just how diversity and inclusion are viewed to those behind the scenes.

“When I got into the industry, I noticed how much it lacked diversity in the sense of not even just color, but it just lacked difference in general,” he says.

Brands tend to hire models that will appeal to the new wave of diversity and inclusion to avoid public ostracization, but the people working behind the scenes don’t reflect what is being projected. So there could be a model that has a disability in a campaign, but only for the sake of having them in the campaign – not to bring awareness or normalize models with a disability.

Shaun’s experience in the past as a model during the peak of the push for diversity and inclusion further explained his stance on what diversity means to him.

“I did an interview in 2009 with Guy Trebay for the New York Times and I remember he interviewed me, followed me for like two days, and he basically said to me, ‘I really hope this article helps with making a change in the world.’ The title of the article was called ‘Will His Singularity Lead to Pluralism?’”

“I never understood what that meant until I looked at how the only people that I could look up to when it came to the fashion world were models like Stacey Mackenzie and Connie Chiu,” says Shaun. Today we see names like Winnie Harlow, Jillian Mercado, and Crystal Ren taking the industry to a new place of inclusion.

Shaun tells his perspective on the tokenism that he’s experienced and witnessed.

“I think that’s just something that the industry loves to do…my thing is it all becomes trendy and it’s a fad. Rather than hiring models to avoid being publicly called out for not being diverse and inclusive, brands should hire models to try to understand them and their experiences, which would make their claim of diversity more authentic.”

On his new music

Shaun’s single “YOU CARE,”  produced by Michael Tritter and Carlos Chairez dropped earlier this spring. He explains to Very Good Light the meaning behind the song.

“’YOU CARE’ was my guide of basically teaching someone how to love me, take care of me, but also me caring enough to want to give that person an opportunity to care,” says Shaun.

His new album is dropping this spring and falls under a soultronic, atmospheric world. The intro and outro of the album are done by Shaun’s favorite poet who’s been an icon in his life, Ursula Rucker. His favorite song on the project is “CREAM,” which just dropped today and features songwriter and recording artist Rush Davis.

“The song is about how we spend our time and hard-earned money to chase the dream and at the end of the day, your success rises like cream in coffee,” says Shaun. “It will always rise to the top.”

He puts a lot of intention into his writing process, which he says was inspired by other artists.

“A lot of people write music and it doesn’t really have any meaning,” says Shaun. “I looked at two big artists that I thought were great when you listen to their music. They paint the setting that you don’t even realize that they’re painting for you.” He attributes Frank Ocean and Biggie Smalls to his inspiration, calling them “scenic” writers and artists.

On his dreams for the future and growing platform

Not only is Shaun a musician and model, but he’s also an actor. His acting debut was on Amazon Prime’s original show called “Man of the High Castle” before he went on to star in “American Horror Story” and in music videos. He has dreams of becoming a part of the Marvel universe one day (which we can totally see happening).

Growing up, Shaun was always confident that he was destined to be something great.

“I just knew I was going to be something, I just didn’t know what it was and I knew that for a fact because I always felt uncomfortable in a lot of spaces where I was and it’s just about making the space for yourself,” he says.

Shaun says he can be at a party that others will say is boring and still be the life of the party: “I can have fun anywhere, and exist in any type of space that I want to.”

Shaun has always been an eccentric individual. “I don’t think I’ve ever been ultra-masculine,” he says. “I’ve always been in between, but if you know me personally, I’m very masculine when it comes to tonality.”

He loves that when he looks at the world today, men are starting to figure out who they are and who they want to be.

“I feel like toxic masculinity comes from so many different angles. It comes from other men and even women from what their parents have told them what a man should be,” says Shaun.

“I feel now stereotypes are being broken. My friends and I have this conversation all the time about the sexuality of how women can go explore that part of them but as soon as a man does that they’re ostracized for life and it’s not okay because I feel like we are all allowed to discover ourselves.” 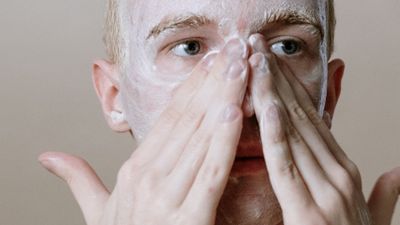 
15 of the most innovative sustainable beauty products across hair, skin, makeup, and more 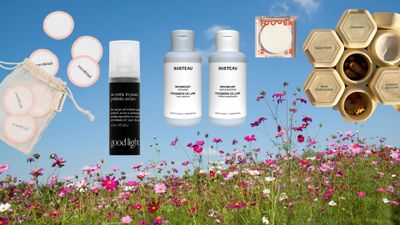