I’m sitting in a barber’s chair front of a crowd of, what I am sure are some of New York’s most beautiful people, a mix of beauty editors, stylists and influencers in what might be New York’s coolest barbershop.

“No big deal,” I whisper to myself, but obviously, I’m freaking out a little on the inside.

SEE ALSO: Ryan Reynolds’ hairstylist just schooled us on hair and how we’ve been doing it all wrong

Rudy’s kind of looks like the inside of my high school locker room – concrete floors, wooden benches, old frosted windows – or rather what I wish my locker room looked like. It’s chic yet rustic, an old school barber shop with an edge of modern New York bohemia.

She also does Shawn Mendes’ hair so who better to entrust?

Kristan is in her zone, on a warpath against hair stagnation. Men don’t experiment enough with their hair, she tells us with characteristic wit. She may as well have been looking directly at me when she said it, staring into the depths of my (mostly empty) soul. Confession: my hair routine hasn’t changed much in the past two years.

My own mop (at this length, mop is the appropriate word for it) and I have a complex love-hate relationship. Its texture is fine and it quickly becomes oily – fluctuating between a nice bouncy wave and a complete flyaway disaster without warning or much regard for my plans. I wake up in the morning either pleasantly surprised or begrudgingly disappointed. When I get out of the shower I let my hair air dry halfway and add a liberal amount of Verb’s Sea Salt Spray and use my hands to give it shape. It’s quick, relatively effective and works with my busy schedule, but it’s become a personal cliche. Enter: Kristan Serafino to inject new life into my hair. She also does Shawn Mendes’ hair so who better to entrust?

As her fingers touch my scalp I can’t help but think that the very same hands touch the scalps of Ryan Reynolds and Daniel Craig. So I’m basically famous now, right?

She brings me up for a demonstration, I’m nervous but hope it doesn’t show on my face. Despite being in front of 30 people, she looks me in the eye and I feel completely at ease in the chair. As one of her hair models, I was told to come with hat hair, and I really committed. I wore an old baseball cap from the moment I woke up to the moment Kristan starts, so we’re really beginning at rock bottom.

“We wanted to create something with more volume, add a texture to your hair from something that was flat and sweaty,” she says. She uses Rudy’s Clay Spray which is kind of a brilliant mix between a dry shampoo and a salt spray, it takes away oil while also giving the hair somebody. She sprays some into her hand and emulsifies it into her fingers then runs it through the hair from back to front. ALWAYS back to front, she emphasizes.

As her fingers touch my scalp I can’t help but think that the very same hands touch the scalps of Ryan Reynolds and Daniel Craig. So I’m basically famous now, right?

She is a little bit rough around the side, pulling it upward for volume, I resist looking like I’m in pain, and damn, was it worth it. Then, she finishes it all off with a blowdryer. “I blasted it dry for 30 seconds, you can air dry it but I think giving that heat to it gives the hair more volume.”

Serafino is funny, genuine, and so charismatic it’s easy to see why she has a full roster of A-list clients. If I’m being honest, I have a bit of a crush on her now. If she can somehow transfer even half of her charisma through her fingertips into my head then I’d be set. Not to mention her veritable mastery of hair, her fingers work magic. After a short, maybe 4-minute demonstration by hair is perhaps the chicest it’s ever been, lifted and shaped to perfection and yet still feels inexplicably soft like there is almost nothing in it. AND now Shawn Mendes and I share at least one thing in common now.

“Now, go for a walk!” she says. I channel my inner Naomi and catwalk up the aisle, bathing in the glow of newfound hair euphoria. A couple of strangers ask to touch my head, which is a previously unfamiliar experience, I guess my hair was never worth touching before. Shawn Mendes must get asked that a lot too.

I am worrying that I’ll never be able to recreate it again so, I ask her for tips for hair like mine. If you have fine hair, listen up. “For your texture hair, it’s fine without volume, so when you want volume put the product where you want to achieve it. If you want volume in the crown only spray the crown” she said. She also emphasizes to always spray into the root of the hair so the product doesn’t weigh anything down.

The best part: it’s nearly as simple as my old routine. 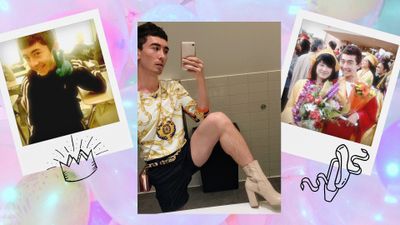 
The beauty in blemishes 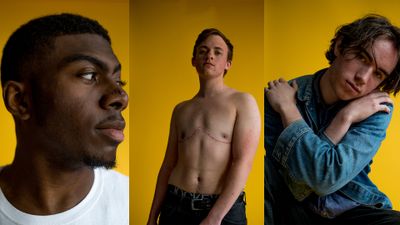