This teenage transgender wrestler is fighting for more.

Inspirational teens. They’re everywhere. They’re pushing culture forward and changing the world for the better. Want to nominate yourself or someone else? Contact us at info@verygoodlight.com.

The season’s match ended here, in an old gymnasium with hundreds gathered around to either gawk or cheer or witness for themselves who, exactly this boy–this wonder boy– that everyone was talking about, was.

The same boy who had just destroyed the competition, polarizing an entire city and sport, at the same damn time.

At this final match, one that he’d been training his entire life for, he felt none but a spectacle. It was impossible not to feel that way. Throngs of reporters stared, their cameras click-clacking at rapid speed. Haters glared, enraged, hissing at the very sight of him. But he also had his many supporters. Most of them friends and family, who cheered him on with unwavering support. It was clear that this young man was the biggest thing to happen to wrestling since, well, ever. Whoever you were: fan or foe, it was impossible not to recognize that this was an historic moment in the making. And it had absolutely nothing to do with the fact that this boy, Mack Beggs, was the undefeated champion with a record of 54-0, possibly the best athlete the state had ever seen.

It had everything to with the fact that Mack was a transgender boy forced to compete with girls.

“It’s been pretty nuts, everything that’s happened. I feel like my life is the same, but really different. It’s really weird.”

So says Mack to Very Good Light™ of the past few days, which seem like a blur. In a matter of a week, Mack, a 17-year old teenager from Hurst, Texas, has been forced into the national spotlight. That’s because the junior happens to be transgender and happened to win an all girls’ wrestling championship earlier this week.

Before the season even began, Mack, who’s been on testosterone for over a year, was given two difficult choices. He could either sit out of wrestling altogether, or he’d have to continue the sport but compete with girls. This, according to an outdated mandate by the University Scholastic League (UIL), Texas’s governing board when it comes to public school sports. The clause has no specific guidelines when it comes to transgender individuals and defers to determining gender “based on a student’s birth certificate.” It’s a regulation that’s antiquated at best and yet another headline that perpetuates fear and misunderstanding among those who agree with North Carolina’s HB2, aka its public school bathrooms law, which enforces those to use rooms that are based on their gender given at birth. Texas is trying to follow suit with its own version of the law, called SB6.

The decision for Mack was completely humiliating. It had already been a struggle to come to terms with his own identity, let alone explain who he was to other people. But to have to revert back to being a gender you never wanted a part of was gut-wrenching.

“It was demeaning and invalidating to who I am and my pronouns I’ve fought to be,” he tells Very Good Light™.

But it was a no-brainer. He loved the sport. He’d been practicing his moves and training for years. He wouldn’t quit now. After all, this was nothing compared to the confusion and then depression he experienced when coming to terms with who he was.

It was only a couple of years ago, in the seventh grade, when he was able to even verbalize what he was going through. After years of feeling displaced and not feeling quite confident in his skin, it was his very mother who figured it out. She was watching a transgender special with Katie Couric when she asked Mack to come over.

“I wasn’t really paying attention and didn’t want to watch it since my friends were over,” Mack recalls. “But after I went and saw some of the interviews, it really struck how similar their lives were to mine.” That was it. Being transgender and identifying with gender dysphoria was exactly what he was going through. After coming out to his friends and family members, depression starting sinking in.

“Having to deal with it and having to think about how I was going to get through this was very hard,” he says. It lead him to seek hospitalization to treat his depression. After he felt better, he went back to school where his peers at his high school, Euless Trinity in small town welcomed him with open arms.

“I was really lucky that the area that I live is very diverse with different people of different religions,” he says.

It was only last year when he decided he wanted to start taking hormone blockers and HRT, which increases testosterone. Suddenly, Mack started coming into his own. His voice dropped a couple of notches. Hair started sprouting in places here and there. His muscles became more defined. Today, he wears a binder around his chest. “It helps me with my dysphoria to bind, and I can go topless and feel like myself.” Next year, he says, is when he wants to finally get top and bottom surgery, a process that will get him closer to the body that best reflects him.

But for now, he’s concentrated on being the best he can be with the body he has. He’s also looking forward to the summer when he’ll be able to compete with other guys, this time under USA Wrestling’s regulations. Under the rules for USA Wrestling, females can compete in male sports, but not the other way around. “It’s cool for me but it’s invalidating for trans women,” he says.

It’ll be the first time he gets to compete against other guys, something that Mack says is thrilling, yet understandably nerve-wracking. Though he gets to compete with other guys this summer, he still plans on competing with his school and defending his crown. It won’t be without a fight.

During this entire time, he’s been swatting away haters and trying not to think too much about a lawsuit filed against him. Recently, a man named Jim Baudhin, who is a Texas-based attorney and parent of a wrestler from a rival school, argued that Mack shouldn’t be allowed to compete at all. The lawsuit argues that Mack will bring “imminent threat of bodily harm” to any of the girls who are competing.

To Mack, it’s completely disappointing. Especially because he’s still good friends with that girl and used to be with her dad. As Mack recalls, it’s her dad, Jim, who once asked Mack to call him “Wrestling Dad.” “We use to be super close and he was supportive of me,” says Mack. But after taking testosterone, everything changed. “He didn’t even ask why I am taking it. He knew I was transitioning and he knew what I identified as. I’m sad because I learned he was never a true friend.”

Though he’s face rejection from his friends’ parents, his fellow competitors have all been super supportive. The girl he recently beat at the state championships couldn’t be sweeter, he says. “She’s a really strong girl.” And everyone at his school has been super cool. Teens, he says, all understand. “It’s the adults and parents who are ignorant and not being educated,” he says.

Mack can’t get into any of the details from the lawsuit, but is hopeful for a positive outcome. For now, he’s focusing on the future. “In ten years, I want to go into martial arts. Take Jiujitsu. Go into the MMA (Mixed Martial Arts).” Get out of this town, forget about the bad memories, start fresh.

But more importantly, he wants to continue fighting. And not just inside the right. He wants to fight for others’ rights. Their rights to be who they want to be. Their rights to be human, and treated as such. And if that’s a trans boy, girl, or anyone in between, so be it. After all, doing the right thing even when it isn’t easy is what being a man is all about.

“I don’t think masculinity should define a man, neither should femininity,” he says. “How you are is how you are. That notion of what a typical cisgender male is deteriorating. There is no longer one definition of what it means to be a ‘masculine man.’ Just be who you want to be. If you define your own gender by your own terms and helping others, then that to me is what a man is.” 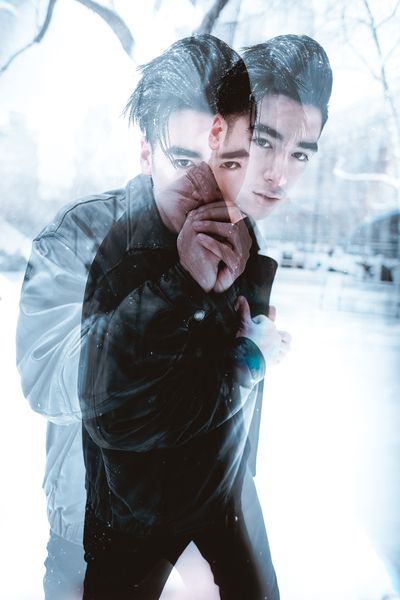 
The inspiration behind this teen’s stunning photographs is powerful.


Help! I woke up with a pimple on my butt.