The men I’ve hooked up with hated my makeup

The morning after is always awkward.

It wasn’t at all awkward when he bought me a drink or when he put his hand on my knee during the Uber ride home, but there’s no way to avoid the slightly uncomfortable tension of waking up next to someone who probably can’t spell my name correctly (though he’s not alone) and who doesn’t have a toothbrush at my house.

Luckily, I’ve memorized the script. And not only have I gotten it down pat, but I’ve perfected it.

The script is necessary. It’s part of me, albeit something that feels like an unnatural, uncomfortable learned reaction to the culture of misogyny in the gay community.

The script is necessary. It’s part of me, albeit something that feels like an unnatural, uncomfortable learned reaction to the culture of misogyny in the gay community.

It’s self-protection, a form of armor to fend off the critics of my identity. Spoiler alert: The boy who might want to sleep over that night may not like you the next morning. He may not approve of the parts of you that have been deemed less desirable or stereotypically attractive.

You see, I’m a pro, the Meryl Streep of morning afters.

Now back to the scene. Action!

He will maybe stick around for a bit and eventually amble to the floor and collect his belongings. Socks, jeans, jacket. As he reaches over and grabs his watch and/or glasses and/or beanie from the top of my dresser, his eyes will probably flicker with vague recognition of the many products scattered atop.

Occasionally, he’ll say makeup as opposed to “stuff,” but only if he’s feeling especially bold. That word is usually treated with disgust. I’ll feel my heart sink slightly as I repeat something that I tell myself is a harmless little white lie.

He will move on. Sometimes we’ll hang out again, sometimes we won’t. It doesn’t get mentioned again.

I will put on makeup after he leaves (especially if a hickey is involved) and sometimes I will do my friends’ makeup, but honestly, I just prefer doing my own. Before a date I apply my go-to Milk’s Sunshine Skin Tint in the shade “Sand.” I follow it up with a light dabbing of concealer on the high points of my face, powder foundation to set it all, a quick dusting of bronzer on the hollows of my face for a light contour, generous amounts of cream and powder highlighter, and then I flick my Anastasia Beverly Hills Brow Definer through my brows. I follow it with Urban Decay All Nighter setting spray in honor of the all nighter I will hopefully pull.

It costs a lot of money to look this cheap.

It costs a lot of money to look this cheap.

It’s not easy to feel like your hobbies and passions are shameful, and in a culture that looks down upon all things “feminine,” it can be tough not to feel like Hannah Montana, like someone living an exhausting double life.

It’s the frustrating reality of dating.

This form of gay misogyny is most evident on the dating apps, carefully placed in Tinder bios and Grindr ‘About Me’ sections.

Those are my warning signs, the painful stings of recognition that whoever he may be, he just isn’t for me.

I’ve accepted my femininity and I celebrate it. I’ve written about it before, but I still stand by it. I honor it every morning when I put on my favorite makeup. With the help of makeup, I feel relaxed. It calms me. It’s fun. Without makeup, I feel attractive. With makeup, I feel amazing.

I’m also aware of the fact that these anti-feminine “preferences” exist and that, though it’s pretty gross, there will always be men who will be disgusted by my embrace of my own femininity, who will dismiss me because of it, or who, at their kindest, will just simply say I am not their type.

What I’m still having trouble with is reconciling my femininity with my desire for something serious, for finding someone that accepts me unconditionally. It can feel impossible to have both.

I struggle with the fear of being told that I’m not somebody’s “type” after thinking that maybe I will be exactly their type. I shy away from revealing what doesn’t make me “masc” because the letdown seems inevitable. It’s bred from insecurity, making it part defense mechanism and part fearful, anxious observation.

Though the men aren’t exactly lining up outside my front door, I don’t have any issue finding guys who want to hang out with and get to know me, nor do I have trouble reciprocating. I do find myself avoiding giving them the chance to truly get to know me, my hobbies, and how exactly I can make my eyebrows look so perfect.

Frankly, the routine of looking just masc enough isn’t very masc at all. Sometimes I revel in the intricacy of it (#SCAM), but most of the time it’s just really annoying. It not only requires extreme precision and a lot of time, it’s disheartening.

As a secret diehard romantic, I want to be myself without the fear of someone walking away. I want to wear highlighter and bronzer. I want to wear tinted moisturizer without having to worry that the blending isn’t impeccable or seamless (even though it always is).

As a secret diehard romantic, I want to be myself without the fear of someone walking away.

It feels like a trap to be asked by a boy, “Are you more masc or fem?” To quote Nicki Minaj, “I’m a human beeeeeeeing.” Our identities aren’t simple. I am not one thing.

For now, my true, unscripted identity feels like a secret. A secret I love and celebrate, one that I hold close to me and that I find ways to love, no matter how hard it can be. A secret that, when the time is right, when I feel safe, I will be able to reveal to someone who deserves it. To someone who can emerge from the awkwardness of the morning after and see me for what I am and like me, not as though my identity is a burden or “despite” it, but who can see my true self with a happiness in its revelation, an eagerness in discovering it.

One day the pesky morning after “script” will be ripped to shreds.

And until then, I will let them think these brows are natural. As if that’s even possible.

Louis is an Ohio-born journalist now living in Brooklyn. He likes eating burritos, doing his eyebrows, and watching episodes of Keeping Up With the Kardashians without fear of the future. Find him on Twitter where he tries to be funny. 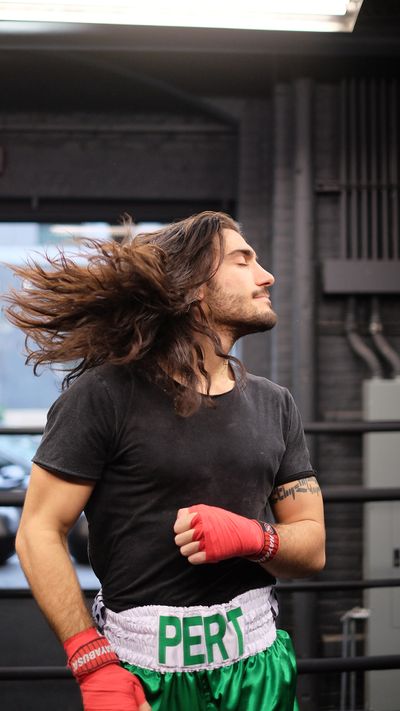 
The world’s biggest UFC fighter also has the best hair


We can’t stop staring at these boys in glitter 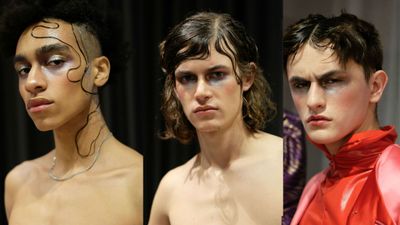