Brandon Kyle Goodman is the non-binary Black actor we’ve all been waiting for.

If you’ve been on a Netflix binge recently then you might’ve watched “Big Mouth,” an animated comedy series written in part by 34-year-old Brandon Kyle Goodman. Before joining the writers’ room, Brandon was mostly seen in front of the camera in Amazon’s “Modern Love” and “People Just Do Nothing,” Netflix’s “Feel The Beat,” and “The Latrell Show,” the latter of which was written and produced by Brandon himself.

Brandon began acting in high school theatre and later moved on to the Tisch School of Arts in New York, where they were born and raised. After graduating from New York University, Brandon went on to become an acclaimed actor, writer, and activist for the marginalized Black and queer communities.

Brandon’s Instagram is filled with resources, sketches, and raw videos where they process and break down issues such as race, equal rights, and even personal experiences. Their rawness and ability to communicate these complex issues to white peers have gained them over 160,000 followers. They’ve shared about The Black Trans Travel Fund, The Bail Project, and more important issues on Instagram and their two podcasts: “Do the Work” and “Black Folx.”

Brandon sat down with Very Good Light to discuss their journey, the issues facing marginalized communities today, and how all of this intersects with their personal life and work.

On coming out and their binary identity

Brandon came out when they were 20 years old while in college after finding out that sharing their true self was easiest when around their community of other queer theatre kids.

“I saw how other queer people were being treated, which was with love and value. It gave me the courage to come out and know I would be safe,” says Brandon.

Feeling safe is the number one concern that most queer people have. Physically or emotionally, the idea of being in danger or rejected because of who you love is something that queer people shouldn’t have to reconcile.

While Brandon knows they are male presenting and is proud to represent Black men, the non-binary experience was one that they found themself resonating with the most. They never felt like a man or woman but knew the value of a Black man.

Gender non-conforming and non-binary tend to get confused as one and the same, but non-binary goes beyond gender identity.

“It’s less than a year since I’ve come to it and been open about it,” says Brandon. “I think it’s always been there. I just didn’t have the language for it.”

While Brandon was telling white people to learn about Black people, they began to think about spaces where they had privilege, such as in communities of Black trans men and women, the asexual community, and the intersex community, and how they could support those communities.

“So in doing my learning about the non-binary community suddenly I just felt ‘Oh, I think that’s me.’ I was watching videos of different non-binary people speak and reading about it, and realized that was my experience.”

On going to therapy

Brandon discusses the importance of therapy for the Black queer community and how it benefited him. “Therapy changed my life and I’m such an advocate for it,” they say. “I know that there’s such a stigma around it, especially in the Black community.”

Older Black generations have a hard time understanding that therapy isn’t just airing out dirty laundry, but processing traumas – no matter how big or small. “I told my mother I was going to therapy seven years ago, she was like, ‘Talk to Jesus.’”

Since attending therapy four years ago after coming out to their mom, Brandon has been able to unpack many subconscious traumas.

“I think a lot of us perform strength and we do it so well and we fake it till we make it, but I’m interested in thriving. I don’t want to just survive in this lifetime.”

Intersectionality is a word we hear more and more these days as society is moving towards progressive ideals. Brandon found himself compartmentalizing their Blackness and their queerness as two separate things. In Black spaces, queerness wouldn’t be embraced yet, in queer spaces, Blackness wouldn’t be embraced. The idea of leaving parts of himself in certain spaces didn’t feel right for Brandon.

Representing the Black queer experience is important to Brandon, and that’s what they preach intersectionality and the value of it.

“Think of those of us who do live in those intersections. [We] often find ourselves having to leave a piece of ourselves out of the equation to make other people feel comfortable.”

On future goals, and their advice for young Black queer kids

Brandon’s list of accomplishments just keeps getting longer. “Big Mouth” has announced a spin-off and Brandon will be part of the cast as a voice actor. On top of that, they have dreams of having a production company to give opportunities to more Black, queer, indigenous, and Latinx voices.

For far too long, only one of any marginalized group gets the limelight and success. Supporting inclusivity—a system that works in favor of everyone succeeding—is something that Brandon is all about. It’s about creating a future where not just a few people of color or queer people have all the success, but where everyone has a chance to be mentored and taken care of.

“I want it to really work for all of us and that means mentorship. That means training and giving people the space to fail and learn, as opposed to throwing a Black person in a movie, and if it doesn’t do well then not doing that for the next 20 years,” says Brandon.

Throughout their years in show business, Brandon noticed that many of their white colleagues tend to have someone that has their back. That’s what they want for those who aren’t straight, white, and cis.

As for advice that they have for other young Black queer kids, they say to lean on your community. Finding unconditional love is hard but never impossible, and even though you may not receive it through immediate family, a chosen family is always there.

“Your community is the most important, your chosen family is really going to be your backbone. I could not do anything that I’ve done without the people in my life who love me.” 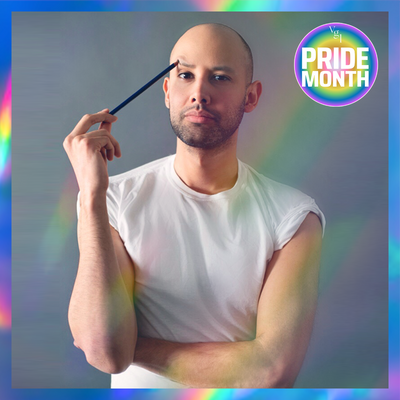