When a father dies, a mother teaches her son how to become a man.

When Jennifer Highbarger discovered her husband’s diagnosis, it was far too late.

For months, there weren’t any real symptoms that anything could be wrong. After all, her husband, Truman, was far too young to be sick. Their son, Fisher, had just turned 6 months old and daughter, Jacy, was crawling into her third year and life for the Highbargers, was just beginning.

But a hospital visit changed everything. There, both of them discovered he was in the late stages of liver cancer, a disease that is life-threatening. Three months later, Truman passed away.

Suddenly, Jennifer found herself as a single mother, caring for two young children.

“I don’t remember how I managed life carrying a baby while tending a toddler,” she says. “But somehow we did it.”

Years later, her son Fisher asked to change his name to Truman, not only in homage to his late dad, but also a name that just felt right. He later fully embraced the name in middle school. And with name changes came other changes too, like puberty. The young Truman started growing, his bones quickly getting bigger, voice deepening into a gravely baritone and face sprouting with hair.

With all of these changes and without a father around, Jennifer took it upon herself to be both mom and dad. And that meant helping out with the many experiences Truman was having transforming from boy to man.

Jennifer tried to prepare for the very day she’d have to help Truman out with figuring things a traditional father-figure would teach him. One of those vital moments? Shaving.

Putting pressure upon herself, Jennifer made sure that Truman’s first shave woulds be a special experience. “It was a pretty big milestone,” Jennifer says. “When he went through puberty we made big deals out of things. I was like I want him to have that.”

For Truman’s first attempt at a razor, Jennifer gathered the family of three together in their bathroom. Jacy had the camera ready. Jennifer had instructions pulled out. She began reading them step-by-step, ensuring that Truman get everything right. “Yeah, mom, I get it,” he said, shaving cream around his mouth. In a video Jacy recorded, you can watch a younger Truman, shirtless in his bathroom, having that special moment with his mom. It’s a lighthearted moment, one full of laughter and excitement. One Truman says he’ll never forget.

“It was a little different not having a dad around,” says Truman, now a 16-year old. “Shaving is typically taught by a father but it was different for my family. We did it together, my sister and my mom, just like we did everything else.”

“To not have a father figure teach him [to shave] was probably weird,” says Jacy, now 18-years old. “To not have that introduction into manhood must have been hard. “But I think it was perfect that it was just us. It was always just me mom and Truman.”

The moment was bittersweet for Jennifer, who couldn’t help think about her late husband and what he’d think. “I think it really made him feel like [he was] maturing, [he was] becoming more like a man.” But after the family did it together, she was put more at ease. Her husband Truman would have approved.

“We’re a pretty resilient family,” she says. “We’ve become stronger and have so much care and love and respect for each other. We’re so aware of what we’ve been through and what makes use resilient to begin with. We’re no average family, that’s for sure.”


You’re not the only one confused about shaving.


‘My boyfriend’s never seen my face.’ 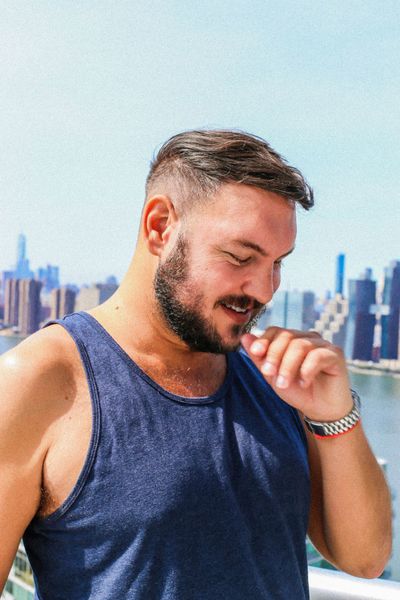