Putting on makeup is painful for me. This is why it’s still worth it.

“I love your eye makeup,” she said.

That phrase always sounded like more of a victory than a compliment. It wasn’t an easy look to achieve, even if it did look “slept in,” and the reason for that is probably not what you think.

Sure, there’s a skill in beating your face–although I’d call it more of a learning curve. Doing makeup on yourself or others is not as easy as YouTubers make it seem. There is definitely an art to finessing beauty products in a way that enhances your look. There are so many ways doing your makeup can go wrong, which is why I totally understand why many women and men don’t bother with it. For me, makeup is my “me time.” Some people like to read, others hit the gym, I like to slather my face in beauty products even if the end result looks like shit–it’s calming. This morning is a bit different though. Doing my makeup feels like work.

SEE ALSO: This is what happens when you’ve swiped right on strangers for years

I’ve just finished moving into a new apartment. I unpacked my last box from my Subaru last night, and my body is not happy with me. My pain could be due to living on the third floor of an apartment without an elevator, or the fact that I’m getting older. But it could also be because of my Juvenile Rheumatoid Arthritis.

Some people like to read, others hit the gym, I like to slather my face in beauty products even if the end result looks like shit–it’s calming.

At this point in my life JRA is just something I’ve lived with for the past twenty-something years–it’s not really a big deal anymore, especially because the disease is in remission. You get used to the pain after a few years. Well, maybe not quite “used to it,” more like I learned how to cope with it. Which makes doing my makeup a little harder.

I grew up in Phoenix, Arizona, where at the age of 6-going-on-7, I was diagnosed with a disease that, at the time, no one knew anything about. (Juvenile) Rheumatoid Arthritis is an autoimmune disease like cancer, meaning your body attacks itself from the inside out. Think of it as the human equivalent of self-destruct mode.

When I first got sick, every joint in my body was in the process of shutting down.

While the disease normally only affects a certain number of joints, I have one of the rarer forms of JRA–its systemic, AKA in every one of my joints. When I first got sick, every joint in my body was in the process of shutting down. My entire childhood was spent in and out of hospitals up and down the West Coast. I often joke that because I was never around people my own age, Boy Meets World taught me how to act like a regular kid. Doctors assured my parents I wouldn’t live until age thirteen, and if I did, I would be confined to a wheelchair. It wasn’t until the middle of high school that I began to get a hold on the disease, thanks in part to the wonders of modern medicine. Unlike many of the doctors’ predictions, I’m still not dead or confined to a wheelchair (though I do have a fake hip).

As children, we don’t want to be  “different.” At a certain age, everyone just wants to fit in. I tried everything in my power to look normal because I didn’t feel it. I wore clothes I didn’t like, because the other boys wore them. I refrained from asking my mom for the Lisa Frank glitter TrapperKeeper I desperately wanted because I knew it “wasn’t for boys.” I even gave up gymnastics and dance class! Though to be fair, that was my JRA’s fault and not because I was trying to stay under the radar. I was so preoccupied with appearing physically normal, I didn’t even have time to “find myself.”

As the years progressed and arthritis became less of a worry (the hip replacement changed my life TBH), I started to experiment. I experimented with fashion, beauty, and general ways of presenting myself. I fell in love with drag and started to attempt doing my own makeup.

Here’s the thing though: it’s very hard to walk in heels when your ankles don’t work right, and it’s even harder to strap yourself into a skimpy dress when you can’t bend your elbows enough to touch your shoulders. Let’s just say my drag career was very, very short-lived.

Unlike my disability, makeup allows me to declare my individuality in a way that I choose.

My experience with drag makeup, though, did prepare me for my deep obsession with beauty and skincare. And honestly, before my JRA was under control, I didn’t have any time to spend on hobbies or obsessions that weren’t figuring out which strain of medical marijuana will soothe my joints enough to let me sleep.

Unlike my disability, makeup allows me to declare my individuality in a way that I choose. I’m never in the mood to have aching joints, but I don’t have a choice. However, if I don’t feel like wearing makeup, I just don’t put it on. When you’re doing your mascara, even if you fuck it up, you’re in control–you have power over your appearance. That’s why I love makeup.

There are mornings, like today, when my wrists aren’t cooperating enough to put on mascara so I skip it. My beautyblender works great for blending my concealer and light layers of foundation. I use my fingers to blend my NARS Liquid Blush (in Dolce Vita) onto my eyelids and cheeks because I can’t really grip a brush today. Penciling my mustache is a bit messy, but I always do it, I have to, and the slept-in look is in, so it works.

Of course, I have to take breaks, but I don’t like to rush my makeup anyways. Beating my face is therapeutic. It may be messy and a bit editorial looking, but it’s a time when I’m in control.

I make the shots.

I steer the ship.

To me, makeup is my escape from reality–even if  brief. No matter what you look like or where you come from, doing your makeup is expressing your creativity. It’s the way you choose to show yourself to the world, and there’s so much power in that. Makeup allows you to feel and be who you want to be and that’s why I love it.

That’s why when she said she liked my eye makeup today, it was more than a compliment. It was a total victory.

Cameron Johnson is a recent grad from SCAD and now lives in Austin, Texas. 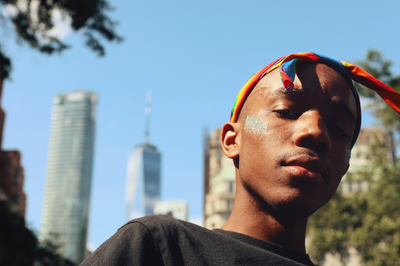 
This teen is challenging masculinity with glitter 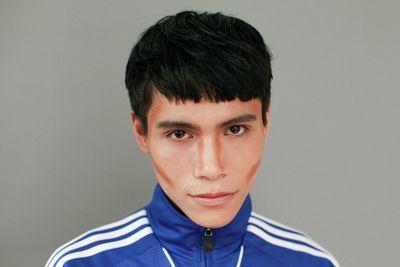