How a breakup led me to become addicted to self-care

On July 15, 2016, a small faction of the Turkish military began what would ultimately end as a failed attempt at a coup to overthrow the government.

That same day, thousands of miles away in London, an average-sized Englishman began what would ultimately end as a successful attempt to break up with me. If you had asked me at the time, there is a good chance I would have told you that these events both held equal significance on a global scale.

Such was the self-centered nature of my mind immediately post-breakup. Nothing seemed as urgent or as relevant as my emotional turmoil, not even images of tanks plowing through the streets of Ankara. After I returned to New York, it should come as no surprise, I started seeing a therapist. I had been toying with the idea of going to therapy for some time—it feels like a rite of passage for New Yorkers, doubly so for gay ones—and the end of my relationship was as good a reason as any to seek professional help.

The fallout from my breakup dominated the first few of sessions with my new doctor, who, despite not taking notes or my insurance, instantly gained my trust as a confidante. In a short time, though, my recent relationship faded from our discussions, and we pivoted to focus on the bigger, badder issues I’d been grappling with since childhood—namely what I identified as a lingering sense of feeling unfulfilled.

Self-care is a buzzy topic in our Me First, Confessions on the Internet times.

I’d always thought of myself as fairly introspective, but never to the degree that weekly therapy sessions require. I was more than a bit lost wading through these waters. My therapist and I discussed self-care regularly; it was largely missing from my daily routine at the time. It became readily apparent that I needed to take care of myself mentally and physically if I ever wanted to address the parts of my life that I wanted to fix.

Self-care is a buzzy topic in our Me First, Confessions on the Internet times. Even more so in the wake of an election that left the most sensitive and vulnerable among us feeling desperate and anxious. I would soon understand the appeal, too. For someone who had made a comfortable home nesting inside my feelings for several weeks, official permission to go all-in on me was like an invigorating gift from above, a non-transferrable golden ticket for myself from myself.

I quit drinking for the month of September and got eight solid hours of sleep most nights. I religiously revamped my workout regimen; my abs never looked better. I experimented with face masks. I was always well-hydrated. I threw myself into work and dating with a renewed vigor. I said yes to every invitation that landed in my inbox and even one that slid into my DM’s (a first). My social calendar was jam-packed. I rode taxis with the windows down and texted my friends that I loved New York once again. I even began to build the tenuous foundation of a friendship with my ex (a concept that may or may not ultimately be a Pyrrhic Victory—but that’s another essay altogether).

For the first time in a long time—including even pre-break-up—I felt good. That was big news and it ensured that I wasn’t only a self-care convert in 60-seconds, I was a full-blown self-care missionary—and you better believe I was going door to door proselytizing the Gospel According to Me.

It was a house of cards, built atop a Jenga tower, resting on a wobbly table in a crowded bar where a DJ spins bass-heavy EDM while a drunken bachelorette party shimmies arrhythmically nearby.

Any occasion—dinner party, lunch meeting, press event, walk to the bodega—became an excuse to espouse the benefits of self-care I’d discovered. My friends, parents, and colleagues were along for the ride, whether or not they actually wanted to be. I was the Magellan of meditation, the Lewis and Clark of the power of green tea and the Neil Armstrong of visualizing your goals. Any opening in a  conversation was enough to get me going.

To say that this swell in confidence stood upon an unsteady foundation would be an understatement. It was a house of cards, built atop a Jenga tower, resting on a wobbly table in a crowded bar where a DJ spins bass-heavy EDM while a drunken bachelorette party shimmies arrhythmically nearby.

One morning, months after my first session, I walked into my therapist’s office secretly thinking that I might not need to see him anymore. I’d arrived in a good place. It’s been real, but I’ve got it from here.

It turns out my therapist is pretty good at reading the room. As I settled in and began prattling on about God knows what, the good doctor made one small statement. “I would say this was never really about your ex,” he said, referring to my time spent in therapy. “This has been about you feeling somehow unworthy of feeling fulfilled.” As supporting points, he then connected elements of my life that I’d never connected before. It was actually quite impressive. Shout out to wherever he went to medical school—I realized I’d never asked.

Self-care can also be addictive and self-indulgent, particularly when it’s treated as the end—as I’d been treating it—rather than a means to getting to said good place.

The house of cards obviously fell, the Jenga blocks scattered across the floor, the whole damn table collapsed on itself. Why the hell had I been working so hard to get 8 hours of sleep, and to keep my apartment spotless if I still had this monster of an issue to deal with all along? What about all that green tea? My abs? What about that spa I had just visited? I floated in a goddamn salt pool for 20 minutes.

It was here when I was reminded of the initial assessment, that the real work starts once your body and mind are in a good place. For the first time, it clicked. Self-care can also be addictive and self-indulgent, particularly when it’s treated as the end—as I’d been treating it—rather than a means to getting to said good place. It’s a supplement, an appetizer to the entrée. To pile on the metaphors, somewhere along the way, I’d allowed an admittedly worthwhile opening act to creep its way up the marquee until it was headlining. Self-care had become self-obsession, and ultimately, it was all just self-distraction keeping me away from what I needed to address most. It was also kind of expensive, if we’re being honest.

A good moisturizer can really do so much therapy.

I left my therapist’s office that day and immediately went home and took a nap. It’s worth noting that it was 11am on a Tuesday; I hadn’t quite cleared the indulgence zone just yet. And yes, I am aware that I’m still not totally clear—this is a personal essay about six months of my inner life, after all. But in the days and weeks that followed, with my therapist as my guide, I started picking at the underlying issues I’d been keeping down for years. It’s been tough, but it’s also amazing how much depth there is to feeling good based on actual growth and progress, as opposed to burying real feelings with a moisturizer. Though, a good moisturizer can really do so much therapy.

There’s a part of me that wishes I had understood this balance earlier, particularly as it seems so obvious in retrospect. I wish I could have saved myself from delivering a few cringe-worthy monologues about the way in which radiating positivity helps you make new friends. But I don’t know that I would have even been able to recognize and internalize any of this without faltering so dramatically first. Through it all, though, I know without a doubt that there is one thing for which I am most thankful—and that is that no one, by the grace of God, asked me my thoughts about that Turkish military coup back in July.

Steve Dool is a writer based out of New York City. Most recently, he was the deputy style editor at Complex magazine. You can find him on socials @mrdool.

Jessie Rodriguez is a freelancer illustrator and artist from Texas and recently relocated to Brooklyn, NY. He was a bachelors degree in fine arts from the University of Texas Rio Grande Valley. Find him @jessiesupreme.


Can a guy actually be attractive with a sheet mask on? 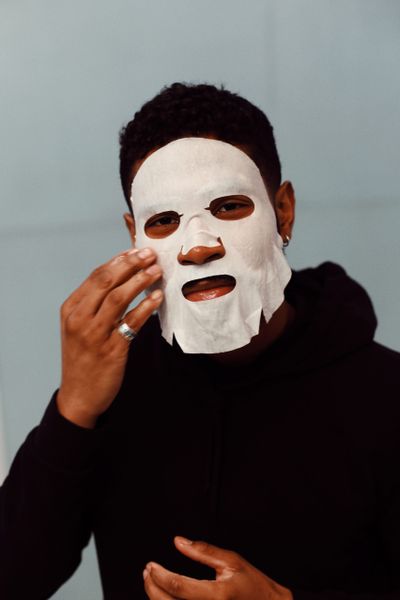