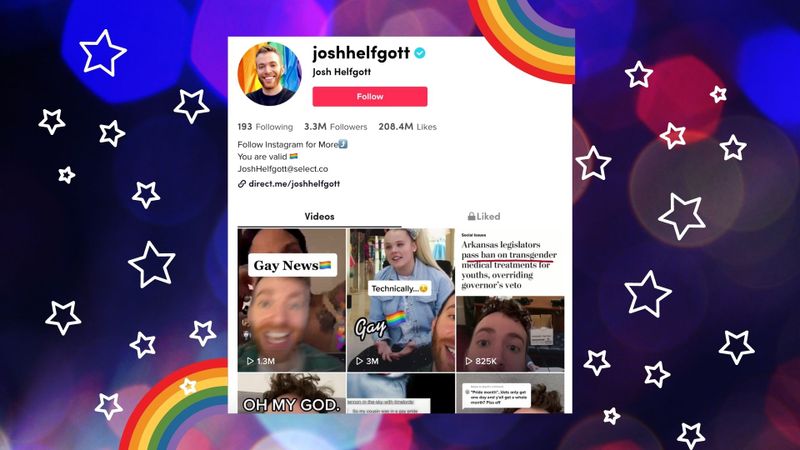 From conservative suburbia in Long Island, New York, Josh Helfgott‘s journey to TikTok fame will make you want to speak up, too.

The 31-year-old queer content creator grew up with two moms and faced bullying in school. Over the years, he’s taken all those struggles and brought the LGBTQIA+ community to light for his astounding 3.3 million followers on TikTok to learn about. Josh is one of the nominees for GLAAD’s “TikTok Queer Advocate of the Year” award as recognition for the storytelling he does online to benefit the queer community.

A popular series he does called “Gay News” garners attention and covers updates on your favorite gay celebrities and influencers. Past segments include Jojo Siwa’s relationship updates and even bigger updates like new TV and movie characters that happen to be a part of the LGBTQIA+community for representation in mainstream media.

He spoke with Very Good Light about his experiences as a queer creator, how he stands up for his younger self, and what he wants his platform to look like in the future.

On his beginnings and experience as a queer creator

Josh posted his first-ever TikTok video just a year ago last April, which happened to go viral. It was a touching video about a gay couple in the 1950s, two men deeply in love. One had written the other a love letter and it brought Josh to tears, with slow emotion drawing music in the background. He says he posted it around 2 AM and went to bed. When he woke up, his video had reached 100,000 views overnight – a feat that brought him to tears again.

“There was one time when I was in college, I posted one YouTube video, and after someone called me the F slur within the first day of it being up. I deleted that video. I was so embarrassed and anxious. I would watch myself and I would bully myself while seeing me on camera. I would do to myself what the bullies would do to me. So I was way too scared, but I always had this whisper inside of me saying share what you know, help people, do something bigger than yourself.”

SEE ALSO: Queer Asian Americans in LA are making space for their identities and redefining cool

He tells Very Good Light that his experience as a queer creator has been mostly validating. Having previously only been exposed to a small number of people that are part of the LGBTQIA+ community, Josh found validation in his queer experience through the queer TikTok community.

“Every part of the LGBT community is different,” he says. “All those letters are unique. T for transgender is a gender identity. L, G, and B are sexual orientations and then among LGB the communities are different. I think joining TikTok made become aware of the strength of just the lesbian community and the power that they hold and how important it is for me to represent that community well, and same for the bisexual community because many bisexual people have experienced erasure.”

On TikTok’s platform and the potential to go viral

TikTok is unlike other platforms in that you don’t need an existing following to go viral. You can literally start at zero followers and have a compelling story or do something that people want to watch that can potentially go viral with hundreds of thousands of views. However, keeping that audience engaged in the long term is a bit more difficult.

“The challenge with that is a really sharp, double-edged sword because so many people have gone viral once or twice before and it’s hard to replicate virality unless you have an intention,” says Josh.

A large following like Josh’s takes a lot of time to maintain. “I think everything has to change as an influencer and you have to start creating with intention and purpose. For me, it was very clear my purpose was to advocate for people who didn’t have a voice, for my 13-year-old self that felt silenced and ignored and any minority community.”

On his GLAAD award nomination

Josh remembers before he was popular on TikTok seeing other LGBTQIA+ creators wearing hoodies from TikTok and how he always wanted that for himself. A year later, the platform emailed him to let him know he was nominated for a GLAAD award, to which Josh immediately replied, “Yes!”

From growing up with the bullying he endured in school for the simple fact that he was gay to now being a GLAAD nominee, the recognition means a lot to Josh. Advocating for a community that’s always been there for him and speaking up for those who’ve never been given a chance to be heard is his true purpose. The nomination is just icing on the cake.

On his goals for his platform in the future

Josh wants to make every single LGBTQIA+ or marginalized kid feel like they have a safe space, an ally – somewhere that they can go to escape the pain and trauma that society has put onto them. He hopes that his intentions to amplify the voices that get ignored by mainstream media are well received. He also wants to continue to tell the stories that do go viral, but tell them in the way that he thinks they should be told.

He shares his dreams for the future with Very Good Light.

“If my voice is heard, my dream came true,” he says. “My biggest goal is to stay true to my intention. I watch other creators and influencers and advocates and I see what society and views can do to them.”

“I’m not here just for me. I’m on TikTok because I believe the way I can feel most fulfilled is by helping other people. If I had one talent, it would be storytelling and I want to use that for good to help 13-year-old me make sure he knows he’s not alone and is loved and cared for.” 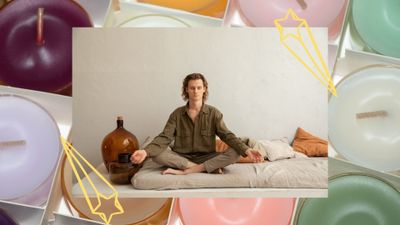 
Candle care is self-care: Here’s how you can boost your mood (and immunity!) with candles 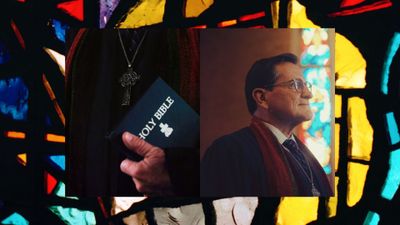