When I was younger and saw myself in the mirror, I didn’t think about what kind of spaces I would fill or what boxes I would check off.

I saw myself and only myself – until I started going to school. I didn’t notice I was different until kids told me I was. They would ask me questions like, “Why does your hair stand up like that? Does it even grow?” Even the questions my own parents asked stuck with me: “Have you been playing outside? You’re getting darker!”

SEE ALSO: As a black man, quarantine allowed me to realize that just being is more than enough

It has taken me an eventful and tumultuous 20 years to finally feel beautiful. The moment I realized my own beauty as a Black woman was during the fall semester of my sophomore year in college. Long after the Black Girl Magic movement, I decided to go natural and do a big chop. As I was cutting off the straight pieces of hair left, I felt like the weight on my chest had finally lifted. Like I was breathing big, full breaths of relief. I looked at myself and I felt finally satisfied.

All the moments leading up to this feeling felt worth it. Looking back on my high school years, I remember googling a few heartbreaking searches, like “How to lighten my skin,” “How to get the brown off my lips,” and “How to get white girl hair.” I have to laugh because that’s my coping mechanism, but deep down I know how sad those searches look to outsiders.

The main thing that really took my joy was the obsession with reaching a standard that was so obviously unattainable. I thought if I could just get my skin to be this shade, get my hair to be this length, then I’ll be closer to being beautiful. Oddly enough, it really did feel like a win when I reached certain points of the “standard.” I think the conversation about Eurocentric beauty standards will continue on until all the beauty standards are dismantled, and hopefully, one day abolished altogether, but that’s another conversation for another time.

The moment I realized I was beautiful changed the way that I define beauty for myself. I find beauty to be synonymous with relief and comfort because at that moment when the last piece of straight hair fell to the ground, I saw myself—and just myself—again.

I know my experience was not unique. I talked to other young Black men and women about their journey to self-actualized beauty and was immediately comforted by their responses – some of which were parallel to my own story, and some of which were pleasantly different. Below, check out excerpts of my conversations with five young Black men and women on feeling beautiful in their own skin for the first time.

I think I kind of always felt like there was something beautiful, interesting, complex, or multidimensional about my soul, my passions, what I was excited about, and what I like to do. I think I always found myself beautiful and attractive, ever since I was a kid.

Physically, I struggled with feeling beautiful up until I was 15 or 16 when I decided that this was my body, this was my skin, and it wasn’t going to get lighter, smoother, or fairer. This is just who I was, and I think owning up to the truth empowered me in a way that trying to change myself wouldn’t have.

I remember being a kid and starting to notice all these weird stereotypes relating to dark-skinned men. [They’re either] these big scary killers or they have to be tall and ripped with white teeth and perfect skin to be considered attractive. Even then with all those things, they’re like this sexual object that people want to put in a category and fetishize. It took a while for me to start to see dark-skinned people be written as just normal humans on screen and not as someone’s fantasy, or a villain, or someone that the main character was afraid of or distressed by.

I was a junior in high school when I started growing my hair out. I think it was the day that I actually cut off the ends of my hair and I just saw my little fro and I was like, ‘Wait! Like this is who I am!’ And obviously, it’s not the norm, but this is who I am and I feel beautiful this way.

I’ve been surrounded by white people my entire life and I remember white people making fun of me, but it was even Black people who made fun of me too. Especially light-skinned people. That was probably an internalized thing and also just colorism. I used to bleach my skin, unfortunately, but all of that kind of shaped how I viewed myself, and I truly would look at myself and be like, ‘You’re ugly,’ and ‘You need to fix yourself.’

My cousin went natural first and I thought her hair was so big and beautiful. I feel like everything with loving myself came from being online on Tumblr, Twitter, and Instagram just following and seeing these other women feeling themselves, loving themselves, and I was like, ‘They can do it, so why can’t I?’

Freshman year of high school, I had gone to class and my friends were like ‘Hey, this dude thinks you’re cute.’ He said he loved my hair and thinks I’m really pretty. I talked to him later on, and he just told me that he liked the way that I looked and that I was beautiful. It was the first time that I really felt like a Black dude had ever thought or said that of me and didn’t use the ‘You’re pretty for a Black girl,’ line. It was genuine.

It was a really weird feeling, and kind of shocking, because I feel like in the past my Blackness was always defined differently. So it was the first time that someone [told me] I was really beautiful, and it wasn’t in spite of being Black, but because I was Black.

I think it’s still hard to believe. Even other people I know, I know the types they go for and it wouldn’t be me, so it’s just hard sometimes to feel that. I think the standard of beauty still feels very much just like a white blonde, so it’s hard to remind myself that I’m beautiful the way I am. It’s kind of a rollercoaster.

I was doing a photoshoot for a friend during my senior year in high school, and as he was taking the pictures and showing me them, I just thought to myself, ‘You look good.’ I felt this surge of confidence. I almost felt on top of the world, like a whole new perspective of myself was unlocked.

In high school, [the attractive Black men were men like] Denzel Washington, Michael B. Jordan, and Chris Brown, so I felt like I couldn’t even look like me. I gotta look like that in order to even be part of the conversation.

Everyday people don’t look like Micheal B. Jordan or Beyonce. You have to deal with [acknowledging that]. [If you don’t], you kind of lose yourself, who you’re supposed to be in that process, or you feel like you failed.

I was just looking into the sunlight one time and I pulled out my camera and I realized the real color of my eyes. I was always told ‘You have black eyes,’ and think the color is so boring. So when I saw my eyes, I saw my iris was all brown and gold, and I thought, ‘Dang, I have really nice eyes,’ and that kind of expanded to everything else.

I have a nice body and nice skin. I was comfortable in my skin, but at that moment, I really realized it. I had big-time actors that I looked up to like Samuel L Jackson and Will Smith. A lot of people used to compare me to [Will Smith] because I had the high-top fade, and it’s just made me feel good to be compared to him because I looked up to him. So that shaped how I see myself now. 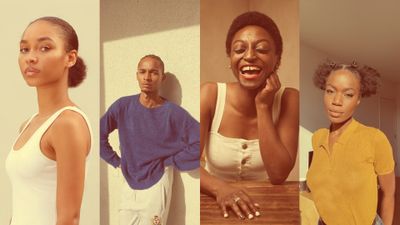 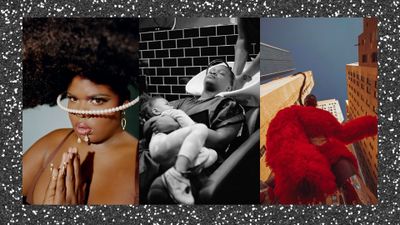