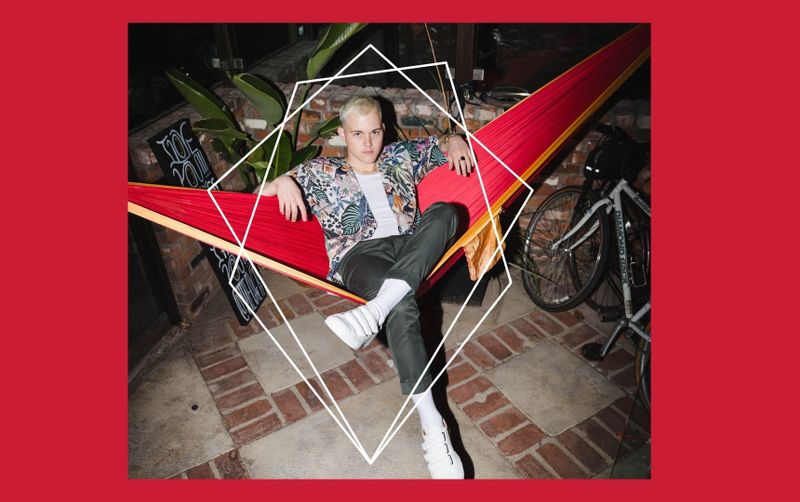 Trevor Daniel is feeling all of the feelings.

He’s suffering from what I can only describe as a quarantine hangover when we talk on a sunny afternoon in August. In these days, the prerequisite “How are you?” at the beginning of every conversation is no longer meaningless small talk. It’s a small yet significant attempt at connection, which can be exhausting without the distractions of a pre-COVID-19 world.

SEE ALSO: From hands-on to no-touch, this is how beauty and fashion services are coping with COVID-19

The self-described “prince of heartbreak” tells me he’s doing okay. It’s been a year of whirlwind highs and tragic lows for the rising star. Hailing from Houston, Texas, his breakout 2018 single “Falling” experienced a revival earlier this year thanks to TikTok. A clip from the song spurred a TikTok challenge and the track cruised into the No. 1 spot on Billboard’s Pop Songs radio airplay chart in July.

The release of his debut album “Nicotine” coincided with a global pandemic this past March, which halted his ability to tour the album, much less perform music at all. As the rest of the world battled to contain the COVID-19 virus, Trevor’s unique sound was impossible to contain. Even without the added press from a nationwide tour, the album reached the ears of Selena Gomez, another Houston native, who reached out to the singer and asked to be part of the remix for his single “Past Life.”

The “Past Life” remix featuring Selena Gomez hit number one on the charts, and the two even virtually collaborated on a surrealist music video that dropped last month. In another career highpoint, Trevor also recently performed a “Falling/Past Life” medley virtually on “The Tonight Show with Jimmy Fallon.”

As his musical career quickly catapulted him into stratospheric stardom, Trevor’s personal life took a devastating turn. The same week that “Falling” hit number one on the charts, his father died. The dichotomy of his incredible success coming at the same time as the death of a parent, as well as a global pandemic, is impossible to comprehend, but somehow Trevor keeps going.

Despite his hectic year, he is surprisingly open and unabashedly honest as I probe him with questions about his life both onstage and off. We talk about the power of manifestation, his experience going to therapy for the first time, his skincare routine, and his next album “sad now doesn’t mean sad forever,” which he’s working on now. If he’s this open with a stranger on a video call, I know this album will be a beautiful, fully formed reflection of the vulnerability he’s experienced in this last year.

As we wrap up our interview, I feel inextricably close to Trevor, even though we’ve only been talking for less than an hour. I realize that this is his unique talent. Fans and seasoned artists gravitate to his undeniable quiet genius and authenticity. His innate ability to explore complicated feelings is part of what makes him such a rare talent in the music industry. We’re meant to feel our feelings, and the way Trevor feels his is a positive example to Gen Z guys everywhere. Trevor shows us that it’s okay to hurt, it’s okay to cry, and that sad now doesn’t mean sad forever. We stan a sensitive king.

Read on for the best snippets from our insightful interview, and be sure to stream Trevor’s debut album “Nicotine” now.

I want to talk about your debut album, “Nicotine,” which came out at the beginning of quarantine. What was that like for you as an artist?

It was weird. Nobody really knew what to do or how we could get people involved. Ultimately, it just felt like we were hit with this ton of bricks and we just had to figure it out. I don’t really know how it would feel to drop an album outside of quarantine, so I don’t really have anything to compare it to. I’m just happy to live in a day and age where you could listen to things as soon as they’re released. You don’t have to go to the store. I mean, I miss going to Target for sure. But it’s nothing I can control. Nobody can really control it.

We had this really good run last year. Me and my friends were saying nothing but positive things and manifesting positivity. And everything, like literally everything we said—even the most outrageous things—happened. It felt outrageous but it proves that everything’s possible.

I totally believe in the power of manifestation.

I 100 percent believe in it. If you truly believe it, if you put the work in and you visualize it in your head, you can attract that positive energy. It’s the weirdest thing ever, it’s insane. And it feels so good, like you have this weird superpower. I’m telling you, I was on a roll with my friends. A lot of our friends were kind of freaked out for a minute how everything was happening.

What came true for you? What did you manifest?

Everything. “Falling” going platinum. We were saying, “We’re gonna go number one with this album.” And then we were talking about “Oh, we’re gonna get a late-night show,” and literally two hours later my manager calls and tells me some late-night show were interested. I just feel like if we weren’t ultimately attracting that energy and being positive, it wouldn’t have happened. Maybe it would’ve, but you don’t know. All l I know is how great I felt while like saying those things and really believing in them.

I really feel like if you have something to give the world, and you feel like the world’s gonna love it, and you truly believe that, there’s nothing stopping you from achieving greatness.

Tell me about your collaboration with Selena Gomez on the remix of “Past Life.” How did she put her own twist on your song?

For me, I feel like this song is about letting go of toxic things in general, but for her, I feel like she knew exactly what those things were. I think that’s why she gravitated towards wanting to do the song with me. It was just a fun process. It was fun to see her perspective on things after being so successful and continuously just killing it. She is just really inspiring.

Did she have any advice for you as a newcomer in this business?

She texted me and told me to remember that everything that I’m doing is for the fans. Whenever you think of it that way, it’s a lot easier to put up with things that are frustrating. She’s such a nice person. Sometimes you meet people like they seem sweet online, and then you meet them and they’re not really like that, but she’s really sweet.

On Instagram, you shared that your next album is going to be more personal. Tell me a little bit more about that.

I’ve just been in my head a lot recently, and I haven’t been able to distract myself as much. So I’ve had to deal with a lot of it. It’s harder for me to like say things in detail because I don’t want to seem like I’m like glorifying it. A lot of people tend to glorify a negative headspace, but it’s not fun. It’s not cool. I’m really tired of glorifying addiction and mental health issues.

I just want to connect with people and make sure they know they’re not alone. Whenever you’re depressed or super anxious or having a panic attack, you start to feel like alone. It’s really easy to feel that way. I feel that way. But it’s not necessarily true. There are other people that are dealing with it too.

Ultimately, there’s only one you, and you wouldn’t be you without all of that mess. That’s why like I’m calling the album “sad now doesn’t mean sad forever.” It’s waves, you know? You figure out the best way to deal with it, and the next time it comes, you have more of a perspective on how to handle it. It doesn’t really go away. You just realize what makes those things pop up in your head or what is just bad energy to be around.

Shout out to my therapist for that perspective. She plugged me in on that. She’s dope.

Therapy is the best.

I saw recently that your father passed away, and I’m so sorry to hear that. What will you remember most about your dad?

We lived in this two-bedroom apartment in Houston, and I don’t even know how my dad did it because he made, like, $9 an hour at Lowe’s. He let me have the master bedroom so I could set up a studio. He slept in the living room, which was just, you know, so sick of him to do for me. He was always helping people. If someone from his work needed a place to crash or needed food or anything, he would help them out.

I think it’s about being yourself, and I feel like it’s the same as being a woman. It’s about being the strongest version of yourself. I don’t know how to say this, but you’re gonna die one day. If people don’t like you, their opinions won’t matter then and they don’t matter now. If you want to release music and someone doesn’t like your song, who cares? There are 7.5 billion people in the world. I think it’s just about doing you, and then being respectful to people. Do the best you can to be the best you can be. And also, make sure you do your part and help people. That’s one thing I admire in a lot of people, and what I learned from my dad.

Okay, I need to know your skincare routine. Your face is flawless.

I use a lot of Kiehl’s products. I went to Sephora a month ago and dropped like $800 on skincare, like rose oils and stuff like that. I also got this BB cream, and that shit makes your skin look so soft. It makes your shit look airbrushed. I’ve been trying to put my friends onto concealer. That shit is the best. I put it on my dark circles all the time. For me, I’m not super into the heavy makeup look, but maybe during a show, I’d be down to go ham on it. I want to do something super fun for a show, maybe get a theater team. That would be sick.

This year has been crazy. What are you excited about in the future?

I’m definitely looking forward to next year. Let’s get out of this year! I’m just trying to make the most sick ass album that talks about those things I’ve been dealing with that I feel like a lot of people have been thinking about. I’m just trying to make it sound as beautiful as possible. I’m really pushing the limits melodically and mixing genres stylistically. I’m just so bored with music. I want to push it to the limit. I’m trying to be that artist that pushes music forward. 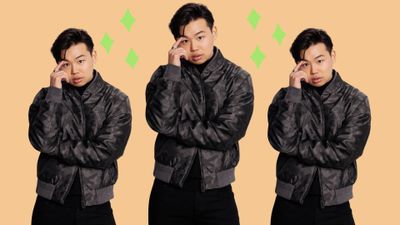 
From hands-on to no-touch, this is how beauty and fashion services are coping with COVID-19 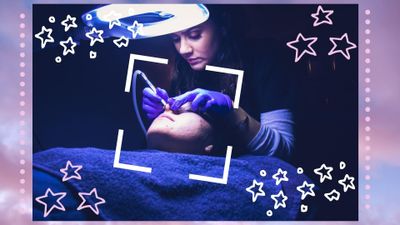