What happens when you mix soju, drag queens and a noraebang party?

“You’re giving me SO MUCH SEOUL,” says David Yi, the editor at Very Good Light.

He’s there hosting a party alongside Bubble T, the queer Asian party for Kare Package, a pop-up shop inspired by Seoul’s night markets at Canal Street Market. The pop up is the brainchild of Joyce Lee, the founder of Talk to Her, a NYC-based consultancy who curated the entire space with brands from Seoul. These include beauty brands like SSANAI, Baebae, M/M (Paris) postcards, beauty items from the likes of SKINRx LAB, Yupan C by YuYu Pharma, Kosette and more.

“Whenever I went to Seoul I was inspired by the night markets the most,” she tells Very Good Light. “The entire experience of Seoul is the 24-hour markets where everyone from all over the world come together. I wanted to replicate that experience to everyone here in New York City.”

It seems to have been a success – at least from the colorful crowd. Among them: drag queens, fashion buyers, stylists, beauty editors among others.

It’s a little past 7 p.m. and guests are already crowding the space. There’s Korean snacks being served out like ddukbokki (rice cakes), bbundaegi (Korean silk worms), kimbab, from Toi et Moi, with a free-flowing of alcohol including soju and beer in flavors like peach and yogurt. Desserts are being served by Spot Dessert Bar as guests were bopping to a few hip hop beats DJed by Bubble T’s own co-founder, Pedro Vidallon Jr.

The night starts with a live beauty talk show between David and David Lopez, the celebrity hairstylist to the likes of “it” girls including: Chrissy Teigen, Ashley Graham and Hailey Bieber (whose name just changed recently). The two beautified in front of the crowd while first wiping away the makeup already on their faces.

“This is the most vulnerable I’ve been in a long time,” David Lopez says. “But beauty to me is all about opening yourself up and being real. It’s that self-care and meditation that’s so important.” He patted on his foundation under his eyes with a brush followed by some misting.”

The two were showcasing the differences between men’s makeup standards in the States (which is all about that no makeup-makeup look) versus South Korea (it’s all about dewiness and that K-Pop eyeshadow). “There’s still this stigma with men and makeup and the more we showcase how normal it is the better we’ll be,” David Lopez says.

The night transitioned into a noraebang party where things got L-I-T. The prizes included an amazing package worth around $1,000 including: sunglasses from Gentle Monster, facials from Sofie Pavitt

, a NY-based esthetician, among goodies include a banana stress reliever, M/M Paris postcards, beauty items from the likes of SKINRx, and more.

The night’s final winner? A man named Robbie Saludares who sang a rendition of Jennifer Holiday’s “You’re Gonna Love Me.”

“This was for Manila,” he says into the mic as he proceeds to do the splits in heels and leather pants.

After the noraebang acts, it was Bubble T’s own drag stars that came out to slay. They included fierce acts including Mahal Kita, Bibingkamama, Dynasty and West Dakota.

As it inched towards 11 p.m., the entire night came to a close. The hour was late but inside Kare Package, the night was still very, very young.


The stylist behind *that* iconic Ezra Miller Playboy is thirsty. ? 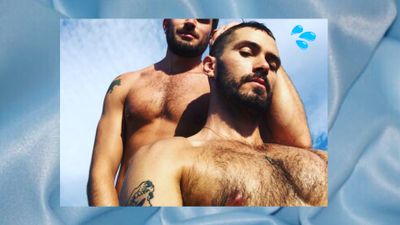