Let’s get ready for the day with our favorite guys who give good face in our series called #GRWM (Get Ready With Me). In this very special edition, we get insight into the life of Zachary Coleman, who was preparing for his special night out as Stella, his rambunctious, flirty, outrageous alter-ego. Very Good Light was there to document Zachary as he transformed into Stella. It was just before her debut as a drag queen onstage.

“Stella was always trying to come out but everyone was telling her not to.”

So says Zach Coleman, a boyish 20-year old who lives deep on the L Train in Brooklyn. Zachary, who speaks with a slight Southern drawl, works at the NYX store in Union Square. He’s new to New York City, but his walk and talk is filled with a confidence and swagger that would suggest otherwise. “It’s more because I feel like I belong here, I’m finally free,” he tells Very Good Light. “I’m finally me.”

It’s the quintessential story for every misfit or unique character who grew up in the wrong city. They find they’re just too this, too that, too big, too small, too much for their provincial towns and pack their bags, seeking refuge with all of the other freaks in New York City, their mecca.

For Zach, his story begins in a super religious family tightly embedded in a Southern church. Houston Texas to be exact where he was taught to pray the gay away. “God is going to heal you from your homosexuality and you’re going to get married and have kids with a woman,” they’d say. “You just have to pray. Pray harder and Jesus will heal.”

God is going to heal you from your homosexuality.

But he couldn’t help his hormones. As any responsible teenager, exploration and curiosity naturally possessed him. So he lost his virginity at 16. “That’s the first time I had sex with a man.” He had tried doing things with his girlfriends but found that he was just not into it. He’d always come to a screeching halt whenever any article of clothing came off.

“I’d breakdown before sex,” he recalls. “I was with this woman for two years. She’s my best friend now. I came out as gay after we broke up and I hear she’s now asexual.”

He thought he’d change. Nay, God would change his sinful ways. He had no power of that. God would heal him like he did the demon-possessed man, the man with leprosy, the man who was blind. Any of the stories in the bible’s Matthew, Mark, Luke or John. All Zachary would have to do is take it to church. Take his sins and nail them to the cross.

And so he did.

He enrolled in Bethel ministry school located in Redding, California, just miles south from the Oregon border. High up in the mountains, far removed from the sins of Houston, he’d be able to call on the name of Jesus, conjure the Holy Spirit and transform anew.

In his daily bible readings, his classes about sacred scripture, he began visualizing himself coming out of the closet, this time as straight. So he diligently studied each verse, memorizing them until he could bury his homosexual self. He grew a large beard. Spoke in a lower voice, a slower cadence, dressed “like a hipster.”

He grew a large beard. Spoke in a lower voice, a slower cadence, dressed “like a hipster.”

Weeks went by. Then months. A year. After his second year of ministry, enough was enough. “I was living in shame. I know one thing, God does not like shame. I needed to get shame out of my life,” he recalls.

And so he took baby steps to become his authentic self. “I was always an authentic person. Why was I pushing things down?”

It was at this time when he turned on the television. While flipping through the channels he found a spiritual being so close to the Jesus he’d read about, so holy, he needed to kneel. Standing in his TV set wearing a blonde wig higher and closer to Jesus was none other than RuPaul. He was watching RuPaul’s Drag Race for the first time and it was an experience that was completely transformative. “That’s how I was introduced to the drag world for the first time.”

“I was always an authentic person. Why was I pushing things down?”

He’d found that itch. He started to scratch until he got deeper and deeper and finally felt someone inside him. Was the Holy Spirit, perhaps? Or something else? And so, with the help of itch, he set out to evangelize his newfound self. His gay self. His man-loving, homosexual self. So he started to preach. Preaching his own gospel, his own unabashed gayness, first, to his best friend, a woman who had become his confident.

“Zach, you know I love you and I don’t have all the answers but what I know is what we’ve been taught,” she sternly told him. Next, were his brothers in Christ, his teachers, his professors, his ministers. “I was told I was wrong.” After bottling up his inner true self, one day he decided it was time.

“I can’t do this shit any more,” he said one day. “I have to express myself how I want.” And so he graduated that year with a handful of people knowing he was gay. But everyone would soon discover his true identity, including his family. On commencement day, while accepting his diploma, Zachary twerked across the stage. “I shook my ass for them!”

But a degree in ministry didn’t feel complete. After all, he still had to get out that something bottled like a genie inside of him. It was the summer of 2016 when he decided to head to the Mecca: New York City, the spiritual destination for sisters in drag like him.

“This past summer I painted my nails and because I didn’t know how to express this feminine side of myself,” he remembers. “I didn’t know how to get it out of me. I would try to do my makeup in secret, hoping no one would find out.” It was at that moment, painting his nails, when he finally met Stella. “She was always there,” he says, coyly. “Stella was always trying to come out but everyone was telling her never to come out.”

Later that summer, when Zachary learned to embrace Stella, is when he told his own dad. They were walking across the Williamsburg bridge one night, when he leaned to his dad and told him who he was.

“Does this mean you’re … transitioning?” his dad asked.

“No dad, this is not what drag is,” he explained. “Drag is an expression of me. In drag, I can embrace my masculinity even more than when I’m not in drag. It allows me to love being male, but there’s a part of me that can only be expressed when I’m a woman.”

That is, being bold, brash, bombastic.

“Stella is a very heightened Zach,” he explains. “When I’m in drag, nobody knows it’s me but everyone wants to know me. She’s hot! Stella’s sexy. That’s something Zach isn’t necessarily. As Stella, I’m more confident.”

“I am spiritual,” Zach says, now putting his final touches on Stella. He glues back his eyebrows and layers foundation over his face. He then creates two, thick arches for brows. “I love God. I don’t know who He is because the world has tainted who God is. My friends talk about Him as a man. But if He created us and we’re an image of Him, why do we box how He looks?”

“To me, God isn’t male or female, or he’s male and female both. Or, why can’t we just accept that, well, God is just God?”

Photos by Hennessy Vandheur, a photographer based in New York City. 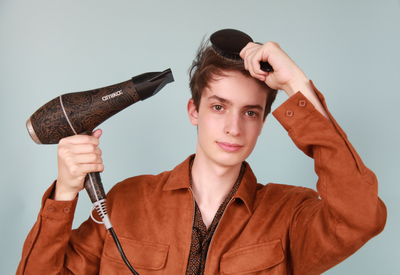 
You’ve been blowdrying all wrong.


This dry shampoo made me lazy AF 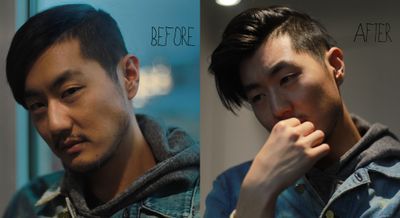