Can a pube oil make my crotch fur sexy?

Life update: I still have pubes.

Even after years of a guilt-induced scorched Earth policy against my hair down there, one that involved plucking, shaving, waxing and even trying the dreaded lunacy of NAIR (for the record, it burns!), my body still seems to be able to grow hair where I never wanted it.

As a brand, Fur’s motto struck a chord with me and summed up exactly what I had been feeling about the inevitable growth and eventual embrace of my pubic hair.

“Few things in life are certain, but pubic hair is one of them,” Fur says on their About page.

The brand seeks to combat the hegemonies that regiment hairlessness by giving its users something of an oxymoron in the day and age of naked mole rat-style aesthetics. They want to make pubic hair attractive.

Pubic hair is the oft-ignored and taboo counterpart to the other elements of hair, whether on our bodies in less private places or on our heads, and I wanted to find a way to treat myself down there, foster my own confidence, and feel sexy, just as easily as a shower and shampoo. For me, it’s taken a long time to come to terms with my own hairiness.

Growing up, I longed to have a lean, hairless body and I was willing to do anything to get it… Until I wasn’t. It hurt. And here’s the thing your parents don’t tell you about puberty and the beautiful change of life: pubes are not only annoying to get rid of, but they come back with a vengeance like Facebook memories– accompanied by ingrown hairs, redness, dry skin, and itchiness. But that’s another story.

Eventually, I grew to accept my own hairy situation with equal parts laziness and rebellion. Laziness in that I grew tired of having to shave more than some people change clothes and it was becoming a bit of an expensive and irritating luxury, and rebellious in that I decided if a sexual partner could handle some well-kept hair down south then they weren’t really worth having sex with in the first place.

My week with pubic oil

Using Fur’s Oil on the daily for some time, made me rethink pubic hair altogether. The product works as a sort of serum for the hair down there in the hopes of leaving it softer and healthier without ingrowns or irritation.

I was wary because generally people are rightfully nervous about their private parts. When I first used Fur Oil, I literally applied a TINY raindrop (drop top) and prayed there would be no itching or burning throughout the day.

Eventually, I decided to be a bit more generous and try out more of the product and I actually really liked what I saw for once.

After a shower, I take a few drops of the oil and massage it into the hair, making sure that it’s evenly applied to all areas, not just focused on one spot. I give it a few minutes to dry as I pick out an outfit.

The oil is thin and doesn’t feel thick or moist (great word, everyone’s favorite), which would be uncomfortable. It dries quickly and the bottle’s 75mL is plenty to last for over a few months.

It smells exactly like every facial serum I’ve ever tried. It has that familiar mildly chemical but with more woodsy notes and an overall fruity scent, not unpleasant but also not entirely natural. It’s definitely the tea-tree oil. Smell is an important thing to keep in mind when it comes to everything going on below the belt, but this wasn’t at all a turn-off.

It also just makes me feel really sexy. Not in a Love Magazine Advent Calendar way, but more in the way that not only am I doing something to ensure that a sexual partner is pleased, but I’m also doing something to treat myself and make me feel pampered.

The pampering comes in the form of softer hair, that doesn’t feel wiry or… I’m just going to say it…. Bushy. It’s soft, which leads to leaves less ingrowns and feels much more soothing. It also takes away from the tendency of hair down there to get a little bit tangly and unkempt looking, which is particularly nice for those of us who are a little bit on the lazy side in terms of upkeep.

That said, much like most luxuries in life, the oil does come at a relatively steep cost. It’s $39 for a bottle, which can feel like splurge when it comes down to down there. It’s more expensive than shampoo, conditioner, or body wash (if you use drugstore brands), but it also lasts you much longer. If you’re self-conscious, then this is worth it for a little extra reassurance that all is well below the belt. If you’re in need of a pick-me-up, it’s worth it as a form of daily self-care and fun indulgence.

So yes, even after torture, after hell and high water, I still have pubes. And I like it, even after the cost. Pubes are great. You’re welcome.


Here’s how to make your face your biggest scam 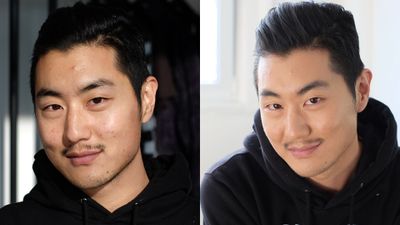